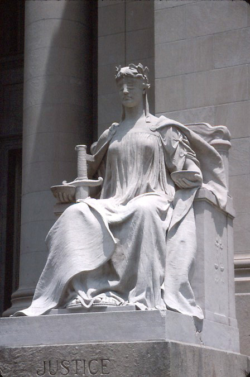 One legal definition of civil rights describes them as “an enforceable right or privilege, which if interfered with by another gives rise to an action for injury.” The civil rights afforded to immigrants allow them equal protection under the law — allowing them recourse to the court system regardless of their immigration standing.

Beginning in American colonial times, immigration had a profound (and generally negative) effect on the lives of Native Americans, who were generally shut out from the civil rights afforded by the new colonists’ laws and later by the laws of the United States. The transatlantic slave trade was a means of forced immigration that profoundly shaped U.S. attitudes on civil rights. Today’s understanding of the civil rights of immigrants has its roots in the Fourteenth Amendment to the U.S. Constitution, which guarantees rights for “any person” within the U.S., including equal protection under U.S. laws.

During the 20th century, shifting views on race among America’s white majority shaped policies around both immigration and civil rights. Inspired in part by eugenicist theories of inferior and superior races groups, the harsh Immigration Act of 1924 implemented a quota system for countries in the Eastern Hemisphere, effectively banning immigration from China, Korea, and the Philippines and severely limiting the flow of migrants from southern and eastern Europe. Between 1900 and 1910, for example, an estimated 200,000 Italian immigrants arrived each year in the U.S. After the 1924 law went into effect, that number dropped to around 4,000.

The Immigration and Nationality Act of 1965, which replaced the quotas with a system of preferences that favored family member migration, was part of a series of sweeping laws — including the Civil Rights Act of 1964 and the Voting Rights Act of 1965 — that sought to realign U.S. policies with changing views on the rights of minorities.

Today, lawful permanent residents of the U.S. have the right to return to the U.S. after traveling abroad, and can qualify for certain government benefits. Any person in the U.S., whatever their status, is allowed to bring claims in U.S. courts.

The passage of the Illegal Immigration Reform and Immigrant Responsibility Act of 1996 had significant repercussions for the civil rights of immigrants who were found to be unlawfully present in the United States. It allowed for deportations for a much broader range of reasons, in many cases without a hearing before an immigration judge to determine the validity of asylum claims. (According to the American Civil Liberties Union, in 2013, 83 percent of people deported from the United States did not have a hearing before a judge.)

In 2018, the international pro-civil rights organization Human Rights Watch criticized what it characterized as a U.S. policy of prolonged detentions and summary deportations.