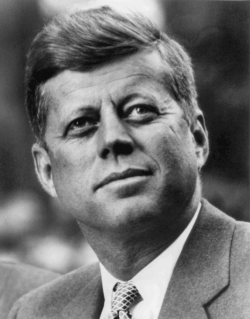 While campaigning for President, John F. Kennedy stated that “we must remove the distinctions between native born and naturalized citizens to assure full protection of our laws to all … the protections provided by due process, right of appeal, and statutes of limitation, can be extended to noncitizens without hampering the security of our Nation.”

In 1962, Kennedy signed the Migration and Refugee Assistance Act, which was created to help foreign nationals from the Western Hemisphere who had fled from persecution in their home countries. The act was specifically created to assist Cubans fleeing the government of Fidel Castro. On signing the act, Kennedy stated that “the American people will be assured that this Government’s leadership will be maintained in the great humanitarian endeavor of helping the world’s stateless and homeless people.”

Kennedy’s Justice Department also oversaw the Hong Kong Parole Program, which admitted around 15,000 refugees from Communist China to the U.S.

When Kennedy was assassinated in late 1963, a significant immigration reform package was already under consideration by Congress. This bill was signed into law by President Lyndon Johnson as the 1965 Immigration and Nationality Act, which made sweeping changes to the way the U.S. handled migration, eliminating regulations designed to favor immigration from Northern Europe and emphasizing family reunification.