President Donald Trump has expanded his travel ban to include 6 more countries, including Nigeria, Africa’s most populous nation.

The expanded ban means the Trump administration is now blocking more than 5% of immigrants, based on the numbers that have historically come to the United States from the affected countries.

“These are husbands, wives, children, parents, and siblings of Americans — plus employees of U.S. companies — who would otherwise get green cards & become US citizens,” said Boundless co-founder Doug Rand, an immigration policy expert. “The travel ban has become a de facto family separation policy, in addition to the more obvious one at the border, and this just magnifies the pain by extending it to other countries.”

Under the new proclamation, citizens of Nigeria, Eritrea, Kyrgyzstan, and Myanmar will be barred from receiving immigrant visas, and Sudanese and Tanzanian nationals will be blocked from obtaining green cards under the “diversity visa” lottery.

These countries join 7 others listed in the original 2017 travel ban. Unlike the original ban, which barred nearly all entry, nationals from the newly-added countries can still visit the United States as tourists, business travelers, students, and other temporary residents. 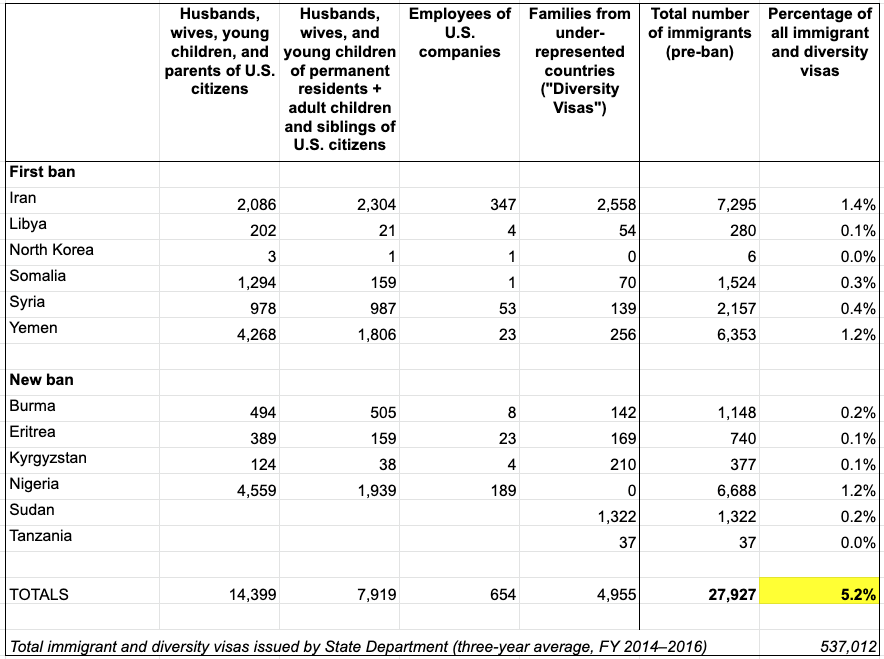 Acting Homeland Security Secretary Chad Wolf told reporters that the restrictions had been imposed on countries that failed to satisfy security requirements. “These countries, for the most part, want to be helpful, they want to do the right thing, they have relationships with the U.S., but for a variety of different reasons failed to meet those minimum requirements,” Wolf said.

Belarus escaped inclusion in the ban (for now), despite earlier reports that it was being considered for travel restrictions. Iraq also avoided travel restrictions, despite security concerns; the presidential proclamation cites its government’s cooperation with U.S. efforts to fight Islamist extremists in the region.

Iraq also avoided travel restrictions, despite security concerns, thanks to its government’s cooperation with U.S. efforts to fight Islamist extremists in the region.

The regulation, which was signed by President Trump on Friday, will take effect on Feb. 22.

From “Muslim ban” to “African ban”

The expanded travel ban drew immediate criticism for targeting 4 African countries, in addition to the original ban’s imposition of restrictions on Libyan, Somalian, and Chadian nationals. While restrictions on Chad were subsequently lifted, the new ban leaves more than a quarter of the total population of Africa subject to travel restrictions.

“The Trump Administration’s extension of the visa ban to four African countries — effectively turning it into an African ban — is another in a line of biased, irrational immigration policies that single out our communities,” said Amaha Kassa, Executive Director of African Communities Together.

“It is pure discrimination and racism, and it has no basis in the security of this nation, domestic security or international security. And I look forward to fighting it,” said Rep. Sheila Jackson Lee, a Houston Democrat who represents many Nigerian-born constituents.

The expanded ban could also hurt America’s historically black colleges and universities, which rely on fee-paying international students from African countries. “This was really devastating for us to hear,” said David Wilson, president of Morgan State University, an HBCU in Baltimore where one in 50 students are Nigerian nationals. “It is of enormous importance to have these students on our campuses.”

Another blow for refugees

The new ban is also a further blow to refugees, following the Trump administration’s decision to slash the refugee quota to a historic low, and its efforts to curb refugee admittances by asking governors to sign off on relocating refugees to their states.

“We are particularly concerned about Burmese refugees who may see America’s doors closed to them at a time of desperate need – including thousands of ethnic Chin, Karen, and Muslim Rohingya, who have fled severe persecution,” said Krish O’Mara Vignarajah, president and CEO of Lutheran Immigration and Refugee Service.

Nearly 5,000 refugees from Myamnar settled in the United States last year, and many had hoped to bring family members to reunite with them in coming years.

What does this mean for you?

Nationals of the listed countries will now find it much harder to obtain green cards and immigrate to the United States. Unlike many other new immigration regulations, the travel ban will apply to everyone who does not have their green card interview prior to February 22nd — so even if you filed your paperwork before the proclamation took force, your application will be affected by the travel ban. People who complete their interviews before that date and are approved will be able to enter the U.S. on their immigrant visas.

One important consideration is that the travel ban only applies to green card applicants who are outside the United States on or after February 22nd. If you’re in the United States on or before that date, you may be eligible to file a green card application using the normal Adjustment of Status process. In that case, your application shouldn’t be affected by the new travel ban.

The travel ban will likely face legal challenges in coming weeks, although since the Supreme Court ultimately signed off on the original “Muslim ban” it may well approve the latest iteration of the travel ban, too. As always, we’ll keep you updated on any further developments.