As of January 2021, roughly 9.2 million immigrants in the United States are lawful permanent residents (green card holders) eligible to apply for U.S. citizenship.

Naturalization is the process by which an immigrant becomes a U.S. citizen.It has considerable economic benefits at the individual, regional, and national levels. Naturalized immigrants earn around 10% more in annual income than non-naturalized immigrants (controlling for skills, education, and fluency in English), suggesting that naturalization, which gives skilled immigrants the long-term freedom to live and work in the United States, makes them more attractive to employers and leads to higher-paying jobs.

A 2015 study in 21 U.S. cities found that if all eligible immigrant residents were to naturalize, their aggregate income would increase by $5.7 billion, leading to an increase in homeownership of more than 45,000 people and a $2billion increase in tax revenue.. If just half the eligible immigrant population of the United States naturalized, the increased earnings and demand for home ownership could boost the nation’s GDP by $45 billion per year.

However, barriers to becoming a U.S. citizen have gotten worse over time, and are not uniform across the country. Boundless’ report uses public data sets to assess the government’s handling of citizenship applications nationally, as well as understand barriers at the local level.

Key findings from this report include:

The coronavirus pandemic exacerbated problems in the system and worsened already-worrisome national trends.

The volume of applications received each year does vary, but only slightly. However, ahead of elections, the number typically does increase more significantly. From July through September 2020, citizenship data shows that nearly 35% more people applied for U.S. citizenship than during the same period in advance of the 2016 election. Boundless estimates that nearly 300,000 would-be citizens should have been eligible to vote in the 2020 elections— including many Senate runoffs— but couldn’t due to the suspension of naturalization services.

Even before the COVID-19 pandemic upended the immigration system, the demand for U.S. citizenship in recent years has remained higher than that in 2016–2017. But just as demand soars, so do the processing times, deepening the naturalization crisis around the country.

These processing times kept rising because the government could not keep pace with the volume of incoming applications, which only got worse as the COVID-19 pandemic led to reduced staff, hours, and capacity. After a 2-year spike in 2016–2017, the volume of citizenship applications fell slightly in 2018 and 2019, only to once again surge to historic levels from 2020 to present.

In 2022, almost 14% of all citizenship applications received resulted in a denial. This rate of denial was about the same a decade ago – 13% in 2009 – and fell briefly in the last few years, but following the pandemic, it rose sharply again. Becoming a U.S. citizen is much harder in some places than others.

Even before the delay from COVID-19, immigrants seeking naturalization faced an uneven, challenging landscape. USCIS field offices around the United States handle naturalization applications differently, with dramatically different processing times, most of which have increased over the last few years.

Immigrants in some cities face processing wait times more than four times higher than in other cities. In Seattle, WA, the average processing time in September 2022 was 19 months, whereas in Helena, Montana an application could be processed in 11 months. Some cities, like New York, Miami and San Francisco, have four or five government field offices where immigrants can attend their citizenship interviews (which were paused for several months during the pandemic). Many other cities – predominantly in the Midwest – have no field offices at all, and immigrants sometimes have to travel more than 150 miles to the nearest one. Immigrants in some cities, like Los Angeles and San Bernardino, experience a citizenship application denial rate two times higher than the national average (which is about 13%), for no apparent reason.

The chart below shows median and maximum wait times for USCIS field offices serving a given metro area. 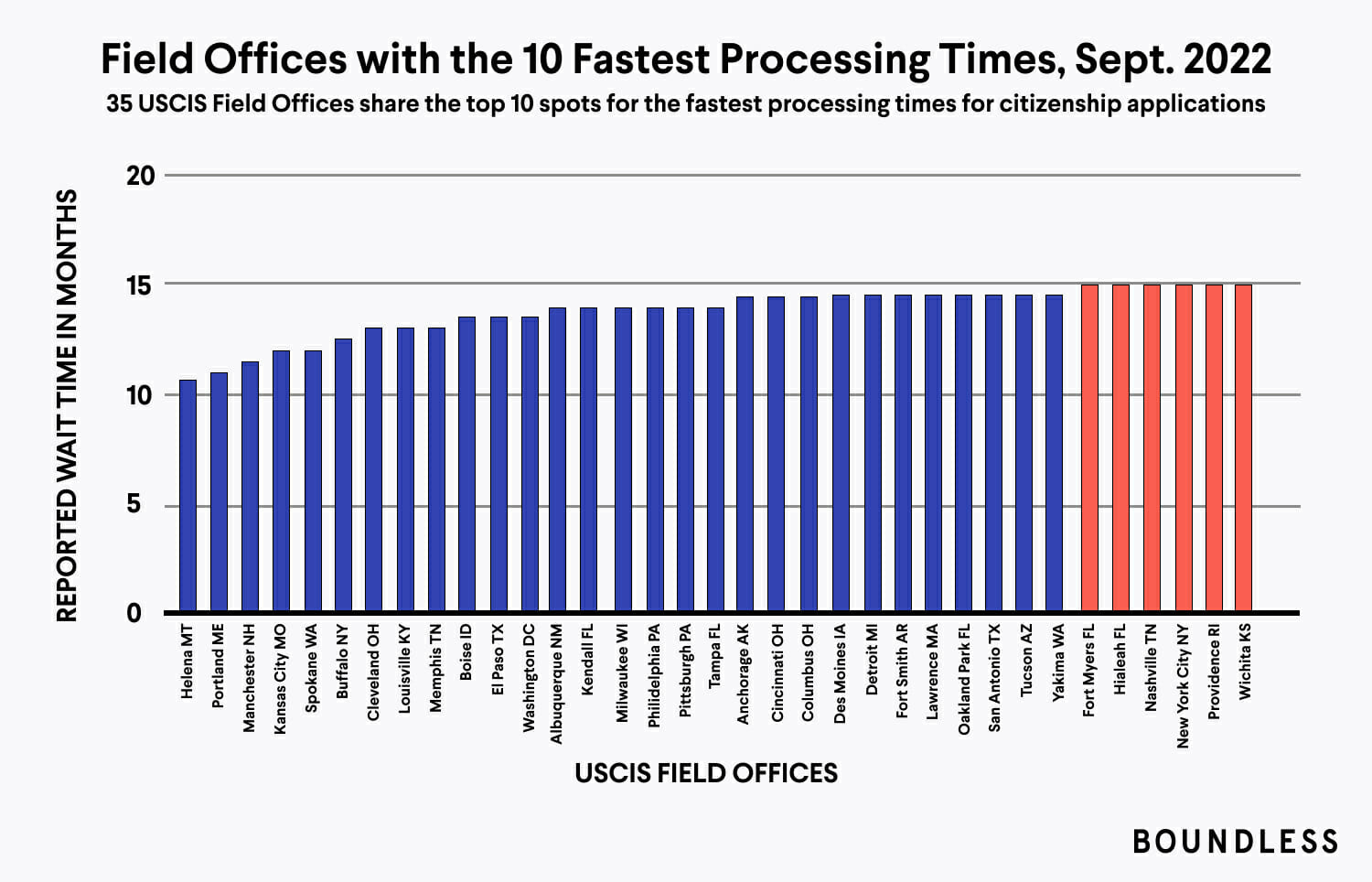 Meanwhile, the city with the fastest processing time in September 2022 was Helena, Montana, which took roughly 11 months to process a citizenship application, followed by Portland, Maine, and Manchester, New Hampshire. The city with the slowest processing time was Christiansted, Virginia, which took nearly 25 months to process a citizenship application in September, followed by Seattle, Washington and New Orleans, Louisiana. 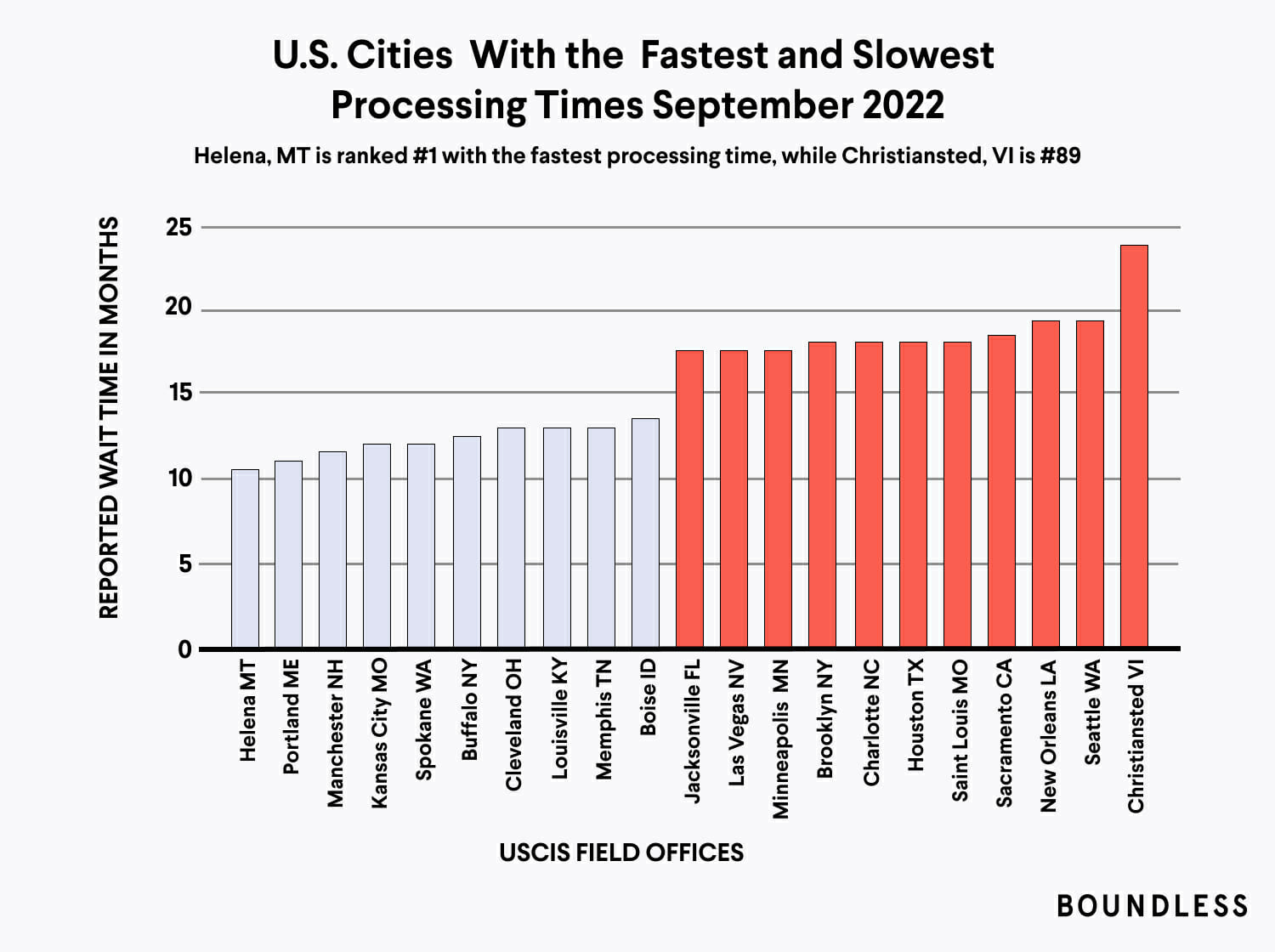 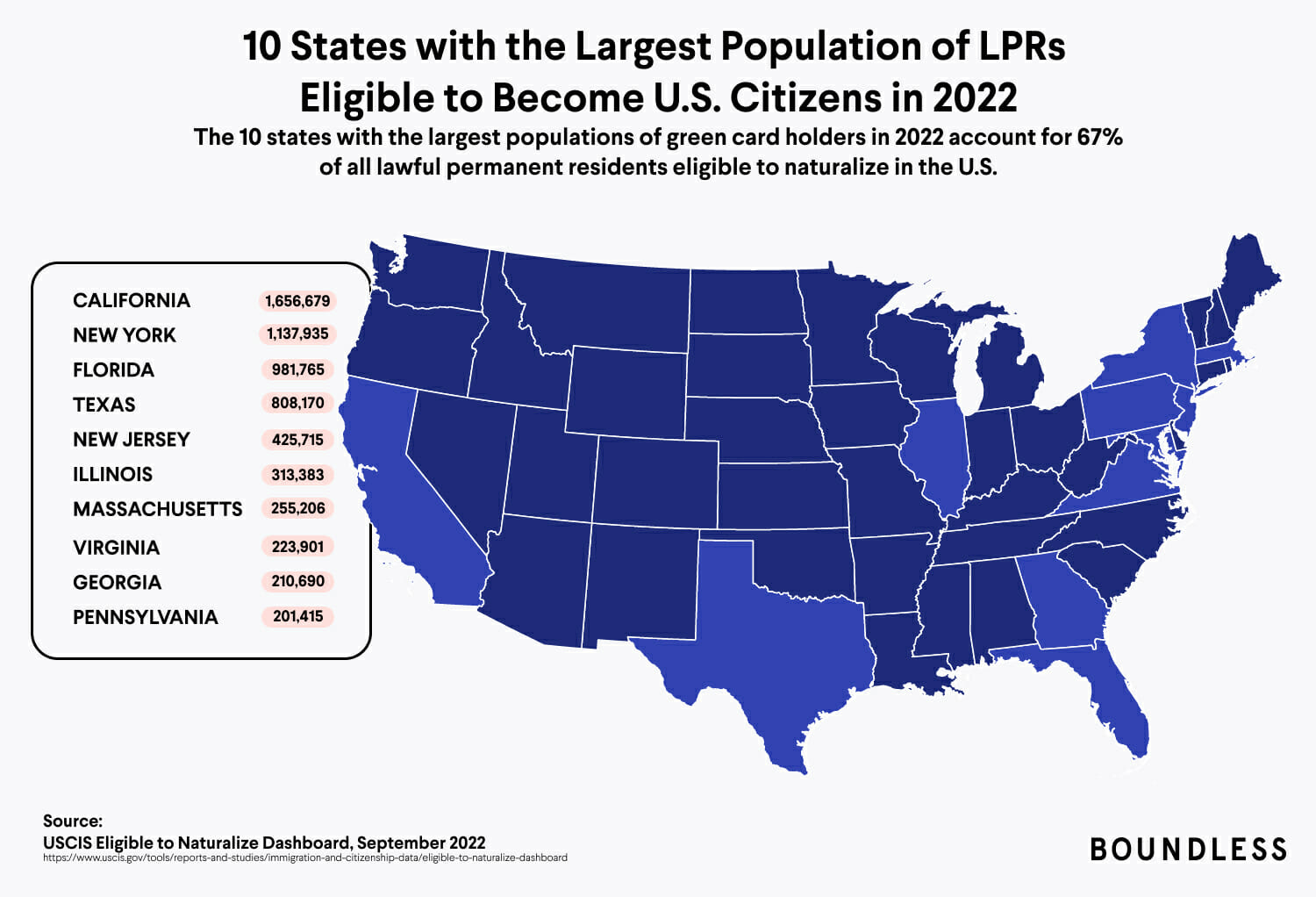 Nationwide, is it getting easier or harder to become a naturalized U.S. citizen?

First, consider the baseline: There are approximately 9.2 million immigrants in the United States who are eligible for U.S. citizenship, but fewer than 1 million typically apply in any given year. Many barriers to citizenship are more or less fixed: given the high application fees and required civics and English tests, it’s simply less costly and time-intensive for most people to renew their green cards every 10 years than go through the naturalization process.

The volume of citizenship applications does fluctuate from year to year, typically spiking during election years — or in advance of an application fee increase — and then decreasing sharply the following year. In 2016 and 2017, something unusual happened: Volume spiked at nearly 1 million applications for 2 years in a row. This trend held true for both 2019 and 2020 as well, but dropped in 2021.

Has the government’s response been adequate? The following data analysis seeks to answer the question. 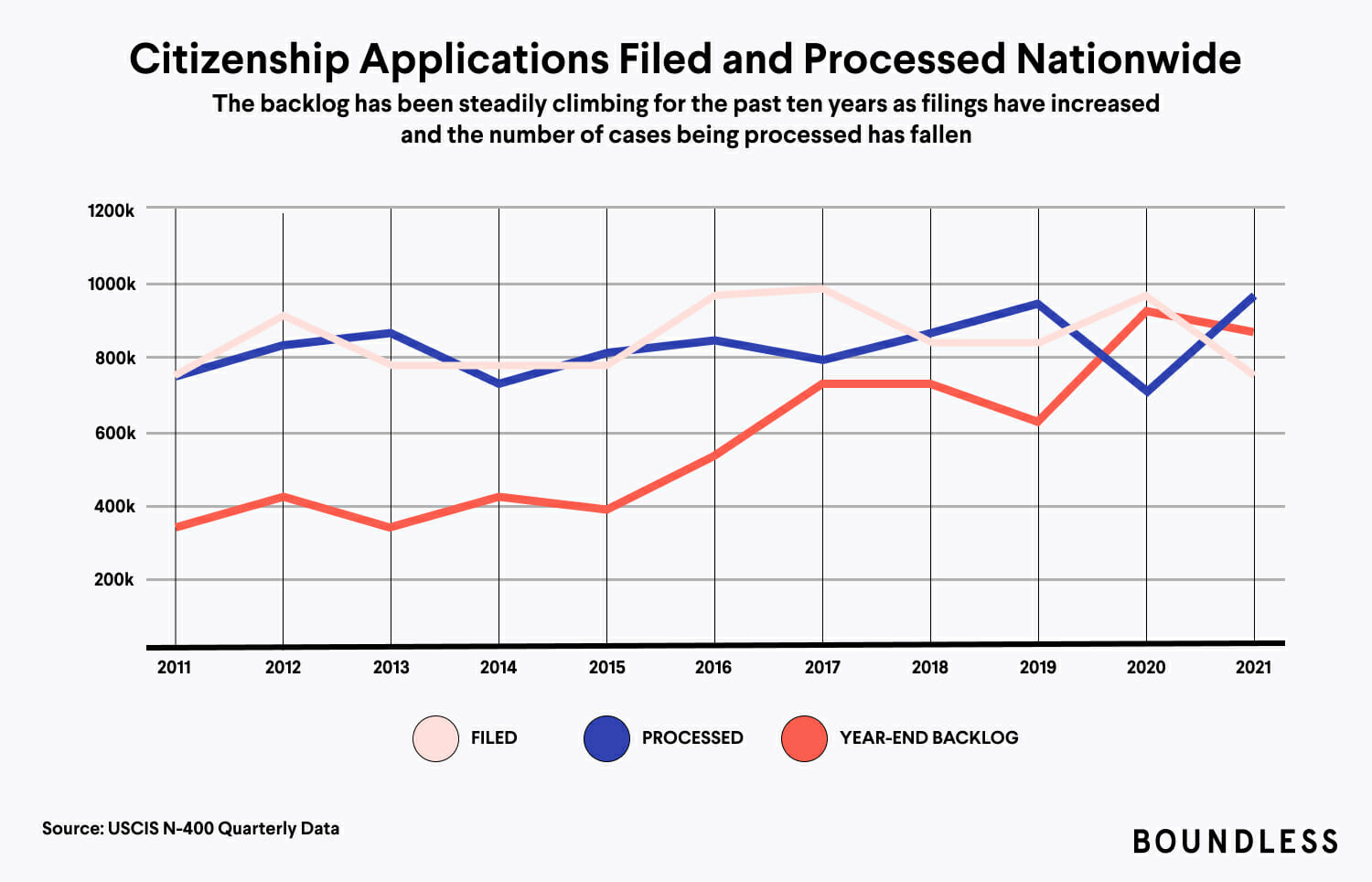 A look at the past decade indicates a worrying trend.

USCIS, the federal agency responsible for processing citizenship applications, has defended itself by noting that the backlog more than doubled during the Obama administration. This is true: the backlog rose from nearly 292,000 in September 2010 to over 636,000 by the time Donald Trump assumed office in January 2017.

But USCIS has also claimed that the surge in applications during 2016 and 2017 created a “record and unprecedented” workload. A look at the past 3 decades shows, however, that this is not true.

In 2007, citizenship applications surged to nearly 1.4 million, far higher than the recent uptick. This was driven in part by a looming 80% application fee hike that year, and an increase in newly eligible immigrants who had obtained their green cards 5 years earlier under the Legal Immigration Family Equity (LIFE) Act of 2000.

USCIS responded with a surge in processing volume the following year, and the backlog plunged to a 30-year low of about 257,000 in 2009.

In the mid-1990s, there was a truly “record and unprecedented” surge in citizenship applications, driven in part by a corresponding increase in newly eligible immigrants who had received green cards under the Immigration Reform and Control Act 1986 (IRCA, also known as the “Reagan Amnesty”). Between 1995 and 1998, application volume stayed well above 900,000, peaking at over 1.4 million in 1997. Although the backlog initially shot past 2 million in 1997-1998, USCIS responded with a comparable surge in processing volume that appears to have tamed the backlog by 1999-2000.

The data indicate that when USCIS devotes sufficient resources to a citizenship application surge, it is possible to dramatically reduce the backlog within one year. That’s what happened in 2000, 2007, and again in 2012.

On the other hand, when USCIS fails to devote sufficient resources, backlogs can get way out of hand. That’s what happened in the mid-1990s, and it appears to be happening again. 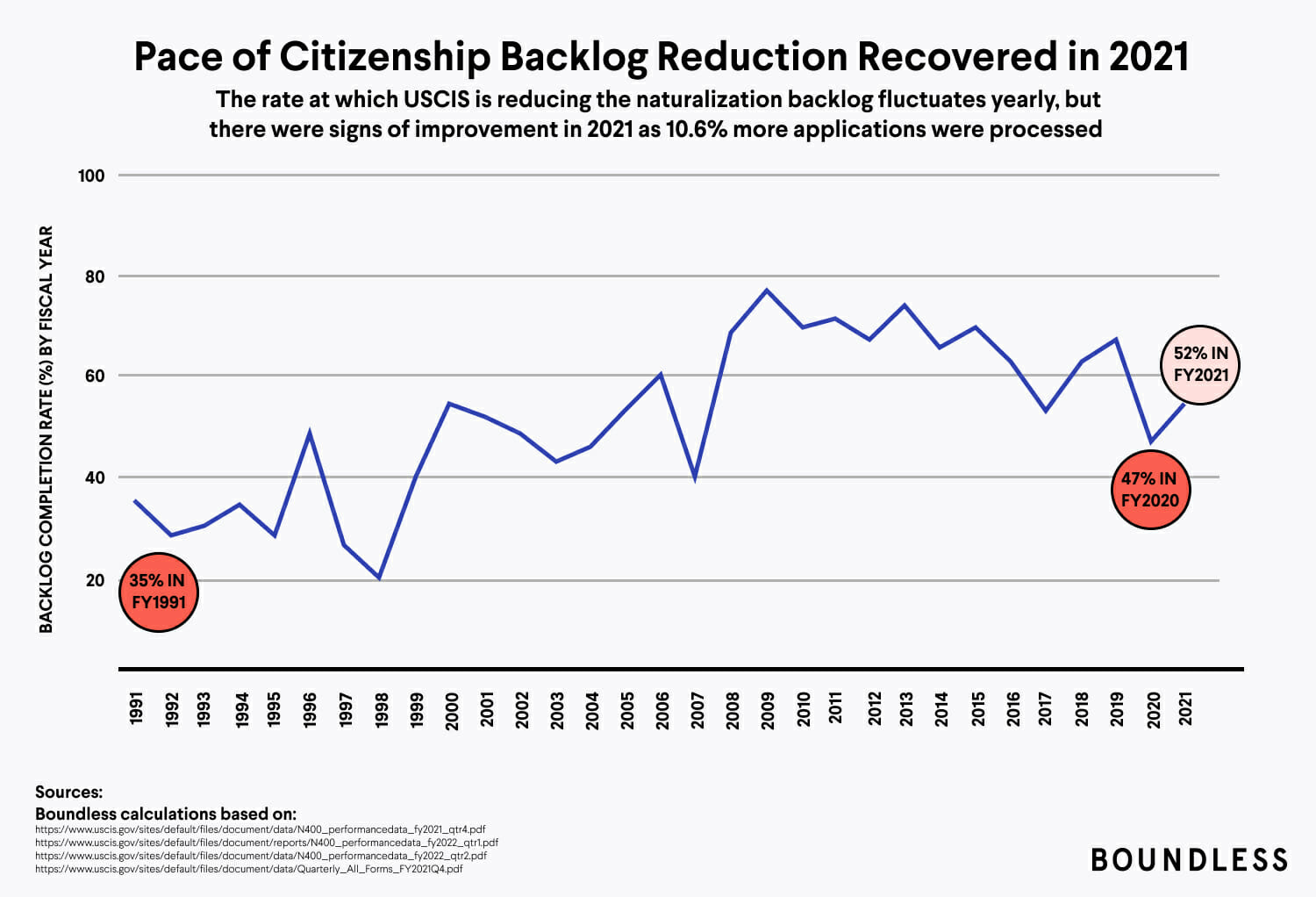 Another way to evaluate this problem is to measure how efficiently USCIS beats back its backlogs. If USCIS processed every citizenship application it received in a given year, plus the applications that were pending from the previous year, that would yield a “backlog completion” rate of 100%.

By the end of fiscal year 2021, however, the rate at which USCIS was completing naturalization cases had recovered somewhat, to just under 52%. Unfortunately, comparing the fourth quarter of FY2021 with the first two quarters of FY2022, a trend is not immediately apparent: USCIS finished Q4 of 2021 with a backlog completion rate of 24%, but by the end of December 2021 it had dropped to 22% before recovering to 25% at the end of Q2 in March 2022. USCIS’s year-end data will reveal if the agency was able to maintain its improving overall pace of clearing the citizenship backlog. 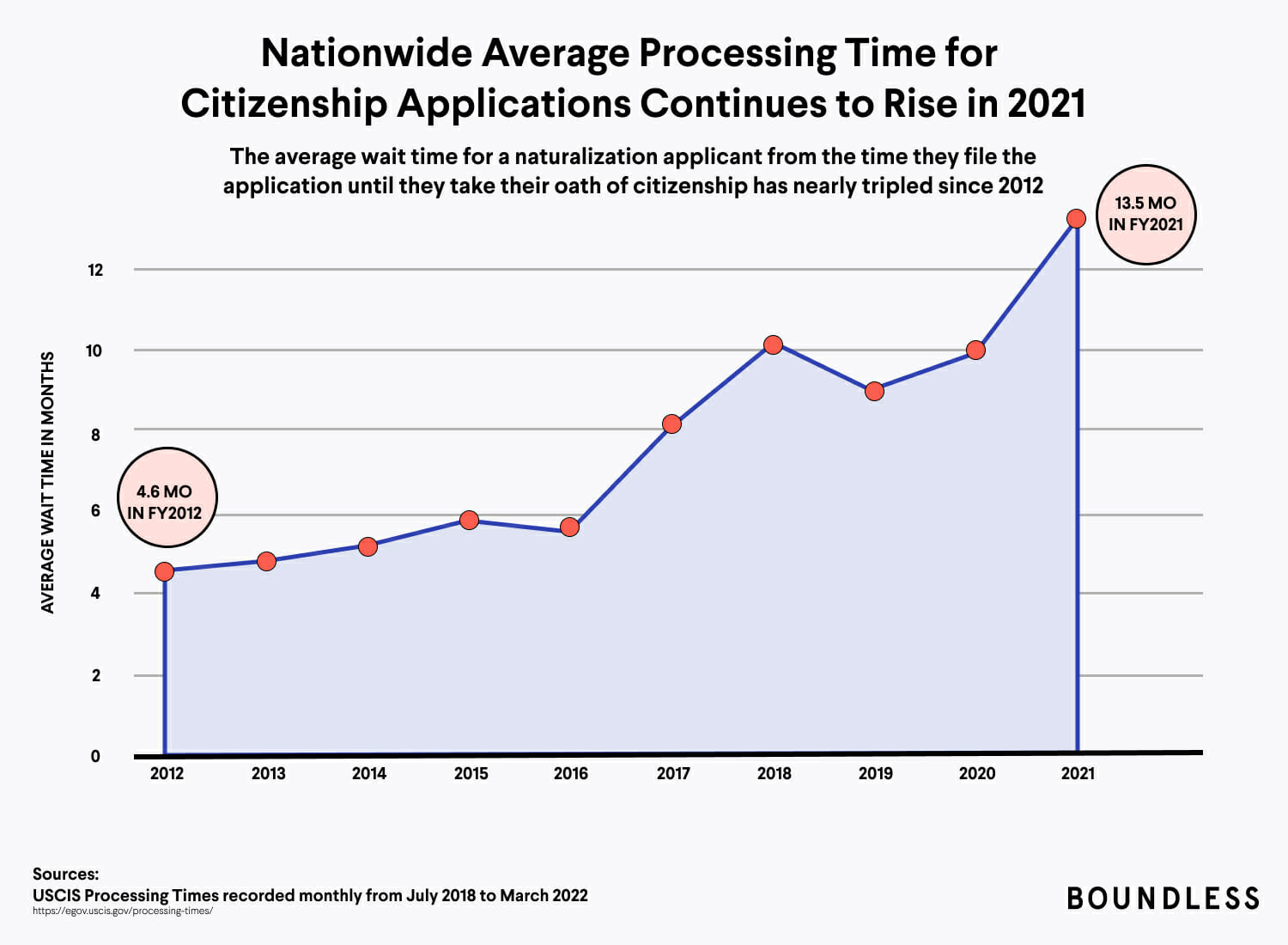 Growing backlogs have direct and negative consequences for immigrants seeking to become U.S. citizens: They have to wait longer for their applications to be processed by the government.

Here the trend is unmistakable: Between 2012 and 2016, median application processing times hovered between about 4.5 to 6 months, before shooting past 8 months in 2017 and hovering at about 10 months in 2018 and 9 months in 2020. Compounding the worrisome trend, starting in March 2020 the coronavirus lockdown postponed the final steps for naturalization—interviews and oath ceremonies — until offices reopened in June 2020. 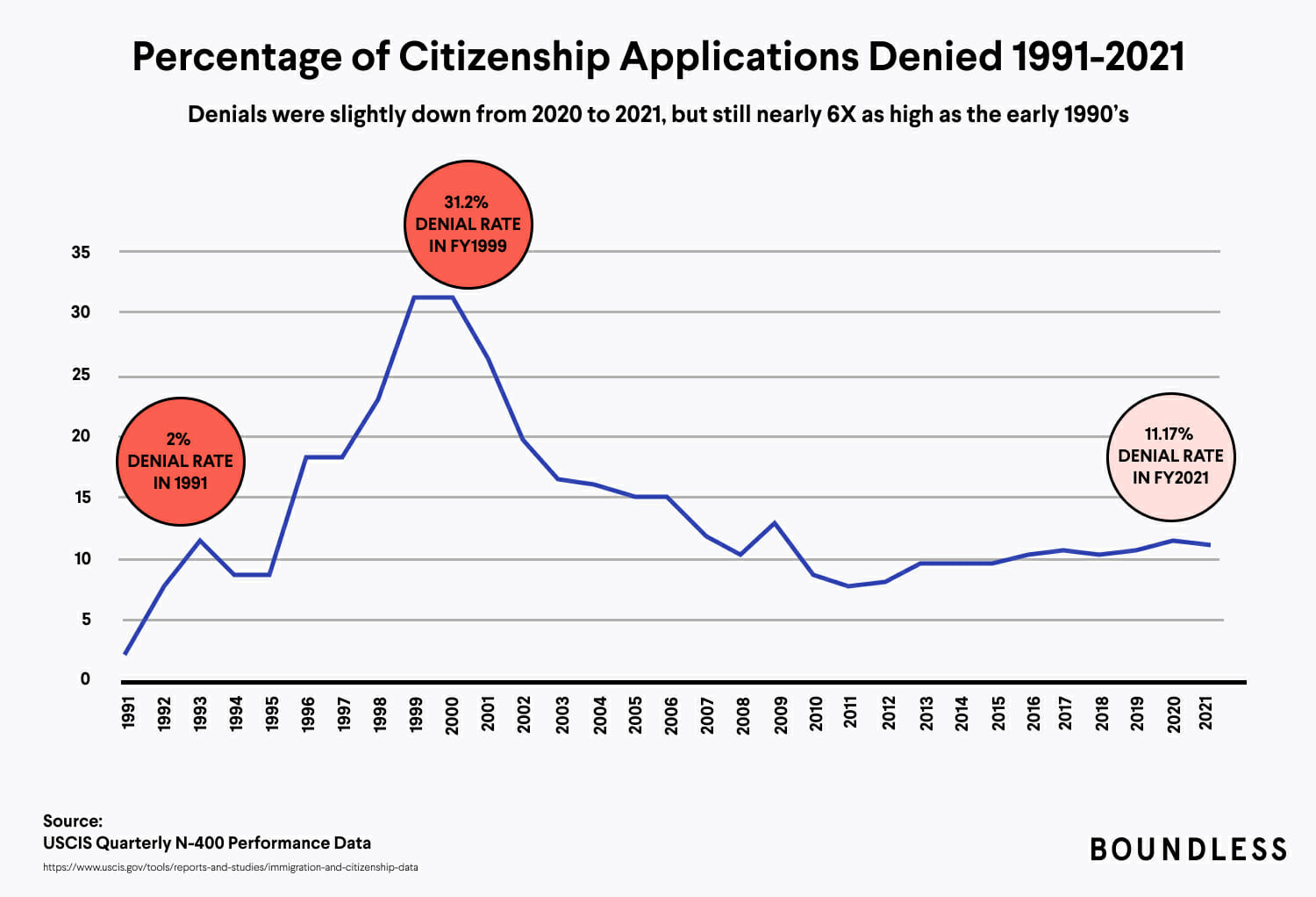 By illuminating national and local trends in new American citizenship, we hope that this report is useful to immigrants, advocates, and state and local government leaders seeking to make the naturalization process more navigable and equitable.

Going forward, Boundless will continue to watch for new trends in the data on U.S. citizenship:

• Will naturalization rates rise or fall, both nationally and locally?

• Will backlogs and wait times continue to rise?

• Will disparities among metro areas and USCIS field offices persist over time?

The Biden-Harris Administration has prioritized immigration and making the naturalization process smoother and more accessible. As part of that effort, the USCIS has now:

1. Reinstated the 2008 version of the civics test, doing away with the 2020 version put in place by former President Trump.

2. Published guidance stating that applicants who are outside the U.S. for one year or more to engage in ministerial or priestly functions will be permitted to use their time away as continuous physical presence in the United States when applying for naturalization.

3. Published guidance that encourages applicants to register to vote through a state’s department of motor vehicles or other state benefit application through positive effects on “good moral standing” – a requirement for applicants. This same guidance also states that an applicant will not be penalized who unknowingly registered to vote before they were a citizen.

4. Implemented a policy that allows certain members of the U.S. military or veterans who served honorably during specifically designated periods and who meet other criteria to now apply for naturalization, even if they are not a green card holder and are living outside the United States.

5. Published a technical update regarding the automatic citizenship of a foreign-born child of a U.S. citizen employee of the U.S. government or member of the U.S. armed forces.

8. Began deploying the use of video interviews for naturalization applicants, where an applicant comes to a USCIS facility but sits in a different room than the interviewing officer who conducts the interview using video technology, to help meet the requirements of physical distancing due to the COVID-19 pandemic.

The following data sources were used in this report: