The Department of State’s National Visa Center (NVC) made some progress reducing the immigrant visa (IV) backlog this month by increasing the number of interviews scheduled in August from 36% over July.  While this appears to be good news, our research raised questions about the integrity of the data that is being reported.

Just over 24,000 interviews were scheduled in July 2022, verus 32,888 interviews scheduled for August 2022. This increase in scheduled green card interviews resulted in an equal reduction in the backlog, from 409,645 pending cases last month to 388,780 cases this month, or almost a 6% reduction.

As we noted last month, however, though it appears there has been a reduction in the total backlog, the NVC may actually be manipulating the data by artificially reducing the number of cases that are considered “documentarily complete” or “documentarily qualified.” When a case is documentarily complete, it means that all the required Forms and documents have been submitted to and accepted by the NVC and is ready to be scheduled for an interview.

By stopping cases from entering the “documentarily complete” queue at the front end, NVC is able to artificially reduce the backlog at the back-end. This can be seen in the difference between the number of cases that are documentarily complete at the end of the previous month and the number of cases left in the backlog after the monthly interview scheduling is completed mirror each other. 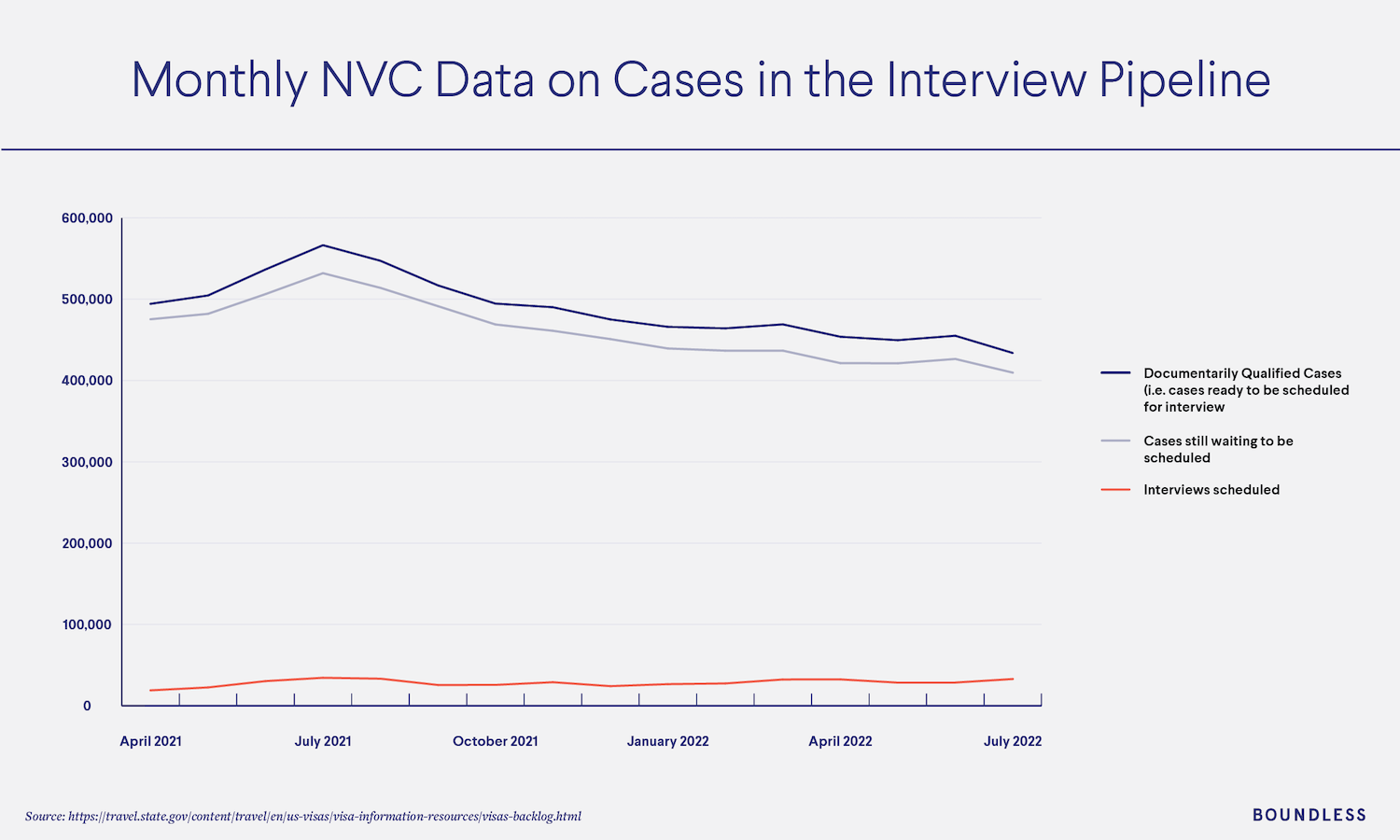 Meanwhile, visa applicants continue to have their initial petitions approved by U.S. Citizenship and Immigration Services (USCIS) before those petitions are forwarded to the NVC. Though the NVC does not release data on the number of petitions it receives from USCIS each month, USCIS usually reports the number and type of forms it receives, along with the number of approved, denied, and still pending cases left at the end of each quarter. The most recent data available is for the second quarter of FY 2022, which ran from January 1, 2022 through March 31, 2022.

As a hypothetical, if even 10% of these more than 385,000 approved cases were transferred to the NVC, that would mean an average estimated number of 6,418 new cases being received by NVC each month of FY2022 (keeping in mind USCIS has only released data through the end of March). The number of cases transferred to NVC each month, however, may be even higher, implying that the only way NVC is managing to reduce the overall backlog of pending cases is by artificially keeping cases out of the backlog to begin with by sitting on them (such as not approving them as documentarily complete) at the NVC. This can be seen in the chart above, where both the documentarily qualified numbers and the pending backlog numbers have fallen in tandem, despite no real increase in the number of interviews being scheduled.

If the NVC were to schedule 33,000 interviews each month — a figure higher than nearly any month in the past 17 months — it would take them another year to clear the backlog, but only if no additional cases enter the pipeline. On average, NVC schedules 28,048 interviews a month, with a median number of 28,447 interviews.

July 2021 saw the highest number of interviews scheduled by NVC since April 2021 (the earliest month for which the government has released data), clocking in at 34,408 interviews. Since that time, the number of cases that are documentarily complete and ready to schedule has fallen nearly each consecutive month.

A previous version of this post on August 17, 2022, referenced Diversity Visa application numbers as disclosed by USCIS for FY2022, Q2. This post has been updated to more accurately represent that data.