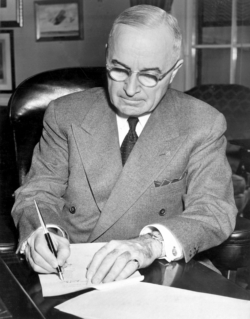 Harry S. Truman became the 33rd President of the United States following the death of President Franklin D. Roosevelt on April 12, 1945. He led the country through the final months of World War II and the policies he enacted—many of which touched on immigration—helped shape the postwar order at home and abroad.

On Dec. 22, 1945, Truman issued Article 225, a “Statement and Directive by the President on Immigration to the United States of Certain Displaced Persons and Refugees in Europe.” In the document, Truman advocated strong U.S. assistance in offering aid to Europeans whose homes and lives had been destroyed during World War II. Truman wrote, “To the extent that our present immigration laws permit, everything possible should be done at once to facilitate the entrance of some of these displaced persons and refugees into the United States. In this way we may do something to relieve human misery, and set an example to the other countries of the world which are able to receive some of these war sufferers.”

In 1950, Truman established a Presidential Commission on Migratory Labor to examine “the extent of illegal migration of foreign workers into the United States.” The next year, Truman signed legislation to protect farmers’ ability to hire legal migrants as farm laborers, while decrying illegal immigration. The legislation set up centers where immigrants from Mexico could stay while the U.S. government matched them with jobs. Still, Truman worried that illegal immigration was a threat to the jobs of both U.S. citizens and legal immigrants. He called for legislation that would provide punishments for employers who harbored illegal immigrants, but Congress declined to pass it.

In 1952 Congress passed the McCarran-Walter Act, officially known as the Immigration and Nationality Act of 1952, which upheld the existing quota for immigrants by national origin, ended Asian exclusion from U.S. immigration and added measures providing for skills-based immigration and family reunification. According to the U.S. State Department’s Office of the Historian, “President Truman was concerned about the decisions to maintain the national origins quota system and to establish racially constructed quotas for Asian nations. He thought the new law was discriminatory, and he vetoed it, but the law had enough support in Congress to pass over his veto.”