U.S. Citizenship and Immigration Services (USCIS) recently released processing and case completion data on all Forms, including family-, fiancé(e)-, and employment– based petitions, green card, and naturalization applications for fiscal year 2021. This data set contains new statistics for the fourth quarter of 2021, as well as the full FY2021, which for USCIS ran from October 2020 through September 2021.

According to one USCIS report, the agency claimed to have a net backlog of 2.5 million cases at the end of FY2019. However, its Service-wide Forms report for that same year showed an actual outstanding backlog of nearly 5.7 million cases. By the end of FY2020, USCIS’ own Forms and policies, fiscal and staffing problems, pandemic-related office closures, and an inability to receive or process most application types electronically had compounded the backlog, which hit 3.1 million net cases and 6.1 million actual, pending cases by the end of the 2020 fiscal year.

2021 saw the USCIS backlog continue to grow drastically. Fortunately, roughly 69% of the 8.84 million immigration applications submitted to USCIS in FY2021 were approved, while a little more than 808,000 were denied. However, despite USCIS completing nearly 80% of the cases it received in FY2021, the processing backlog at the agency grew to more than 8 million pending cases at the end of FY2021. This reflects a 31% increase over FY2020, and a 40% increase since September 2019 in the overall backlog.

Following is a breakdown of the numbers released by USCIS for FY2021, along with comparisons to previous years.

Despite the pandemic, 2020 was a busy year for USCIS, and 2021 saw an even larger number of applications and petitions received by the agency — an increase of 18 percent.

The backlog of pending applications for Employment Authorization Documents (EAD) exploded in FY2021 as the number of Form I-765 EAD applications received by USCIS surged from 1.97 million in FY2020 to 2.61 million at the end of FY2021.

This represents not just a rebound from the pandemic-related drop in submissions in 2020, but an increase of more than 400,000 applications. This surge peaked during the third quarter, running headlong into the backlog of pending EAD applications — 648,985 at the end of FY2020 — to result in a staggering backlog of 1.48 million pending applications.

The fiancé(e) visa — officially a K-1 visa — allows the engaged partner of a U.S. citizen to enter the United States, as long as the couple gets married no more than 90 days later. The newly married spouse can then apply for permanent residence (a “green card”) based on marriage to a U.S. citizen sponsor, who files the K-1 petition for their partner on Form I-129F.

Adding insult to injury, the closure of U.S. Embassies and consulates around the world due to the outbreak of the Covid-19 pandemic in March 2020 has led to a second, separate backlog as beneficiaries with approved I-129F petitions from USCIS move into the Department of State’s consular interview backlog. For more information on the impact of the Covid-19 pandemic on the K-1 and consular processes, see our article here.

The Deferred Action for Childhood Arrivals (DACA) program continued to be the subject of several court cases in 2021 and the numbers fluctuated quarter to quarter, reflecting the program’s uncertain and variable status throughout the year. A total of 438,950 Form I-821D applications for DACA were received in FY2021, a 31% increase from FY2020. Of these, around 82% were approved.

Spouses who have been married less than two years when their marriage-based green card is approved must file a Petition to Remove Conditions on Residence, which is submitted on Form I-751. USCIS began FY2021 with a promising 7.7% decrease in the Form I-751 backlog from the close of FY2020. However, with the exclusion of January through March of 2021 (Quarter 2), the backlog of pending Form I-751s grew sharply through FY2021, from 205,390 at the end of December 2020 to 323,803 at the end of September 2021 — an increase of nearly 58 percent.

Hundreds of Thousands of Green Cards Wasted due to Inefficiency

Because of the large decline in family-based green cards issued by USCIS in FY2020, around 122,000 wasted family green cards were added to the 140,000 available employment-based green card numbers for FY2021, for a total of roughly 262,000. If those green cards also go unused — as up to 80,000 did — they disappear from the system when the new fiscal year begins on October 1, and cannot be recaptured without Congressional action.

At close of FY2021, there were more than 9 million green card applicants stuck in the backlog—about 7.5 million on the family-based side and 1.6 million on the employment-based side. To stay up-to-date on green card recapture and backlog reduction, as well as other important immigration legislation, sign up for Boundless’ weekly newsletter, BIT.

As a result of the steep decline in family-based green cards issued during FY2020 discussed above, 122,000 family-preference visas went unused and were added to the 2021 cap on employment-based visas, which raised the total available to 262,000.

However, USCIS has not had the capacity to process these applications, resulting in nearly 80,000 available green cards “expiring” at the end of FY2021. Current estimates place the employment-based green card backlog — including the USCIS and Department of State green card backlog — at 7.5 million. There are provisions in President Biden’s Build Back Better Act that would recapture some lost green cards for both family- and employment-based categories, but as of December 31, 2021 the legislation is stalled in the Senate.

In a pleasing turn of events, USCIS processed more applications for naturalization than it received in FY2021, approving 800,571 of the applications that were submitted by non-military civilians and denying just under 11 percent. 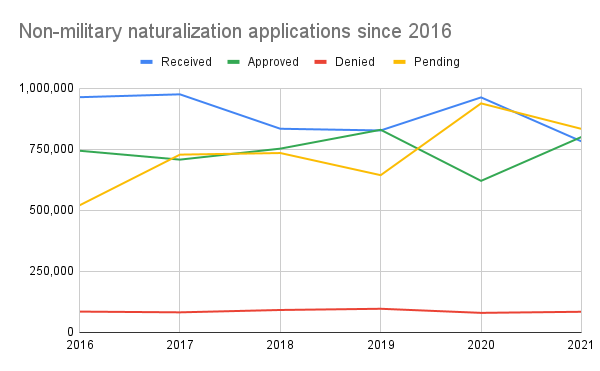 Military naturalization approvals fared even better, nearly doubling between FY2020 and FY2021, from 4,553 to 8,817. This bounceback follows a precipitous decline in both applications and approvals beginning in FY2016.

Because of this, the naturalization backlog retreated somewhat from its high-water mark of 938,154 in FY2020, ending FY2021 with 833,738 pending Form N-400s. This was aided by USCIS prioritizing naturalization applications over other types of benefit requests following the phased reopening of the USCIS Service Centers and Field Offices in summer 2020, as well as falling application numbers coupled with rising approvals and a relatively steady denial rate.

What these numbers mean

According to USCIS, the agency entered FY2020 with a 2.5 million case backlog due to an “unanticipated increase in the overall volume of petition/application filings after the 2016 presidential election,” the implementation of the 2016 fee rule, and “the growing complexity of the work: increasing complexity and length of forms, new statutory and policy decisions, and increased security checks” outpaced USCIS’ capability to adjudicate and complete applications within reasonable processing timeframes. By the beginning of FY2021, the backlog had exploded to 6,380,926, going on to top 8 million by the end of FY2021.

Processing times have also risen dramatically, which have cascading effects throughout people’s lives, communities, and society at large. Individuals waiting in the EAD backlog can lose their jobs as their work permits expire; conditional permanent residents may struggle to prove their work authorization or to travel freely until their I-751s are approved; nonimmigrant visa holders such as H-1B employees are unable to change jobs as they wait for their employment-based green card applications to be approved; companies struggle to staff offices and projects given the uncertainty of skyrocketing processing times — the impact on immigrants, their families, and the U.S. as a whole is enormous.

What is USCIS doing about it?

USCIS has attempted to address processing delays by reusing biometrics for 2.5 million applicants since March 2020, almost clearing the backlog of biometrics appointments, and fully eliminating the “front-log” of cases waiting to be accepted for processing. The agency expanded staffing and overtime at its Lockbox facilities, and claims to be on a firmer financial footing in FY2021 and FY2022.

In July 2021, experienced immigration attorney and policy analyst Ur Jaddou was confirmed by the Senate as the new Director of USCIS, giving the agency its first Senate-confirmed leader in more than two years. The Director promises the agency will “serve the public with compassion and reflect America’s promise as a nation of welcome and possibilities for all” in the coming year, and steps have been taken to reduce barriers to the immigration system, codify DACA, and promote naturalization, and improve the refugee process.

We will be following the numbers, analyzing the trends, and most importantly, keeping you informed on all the latest news that could impact your immigration journey. If you’re ready to start your fiancé(e) visa or green card application then don’t delay — get in touch today to begin the process!