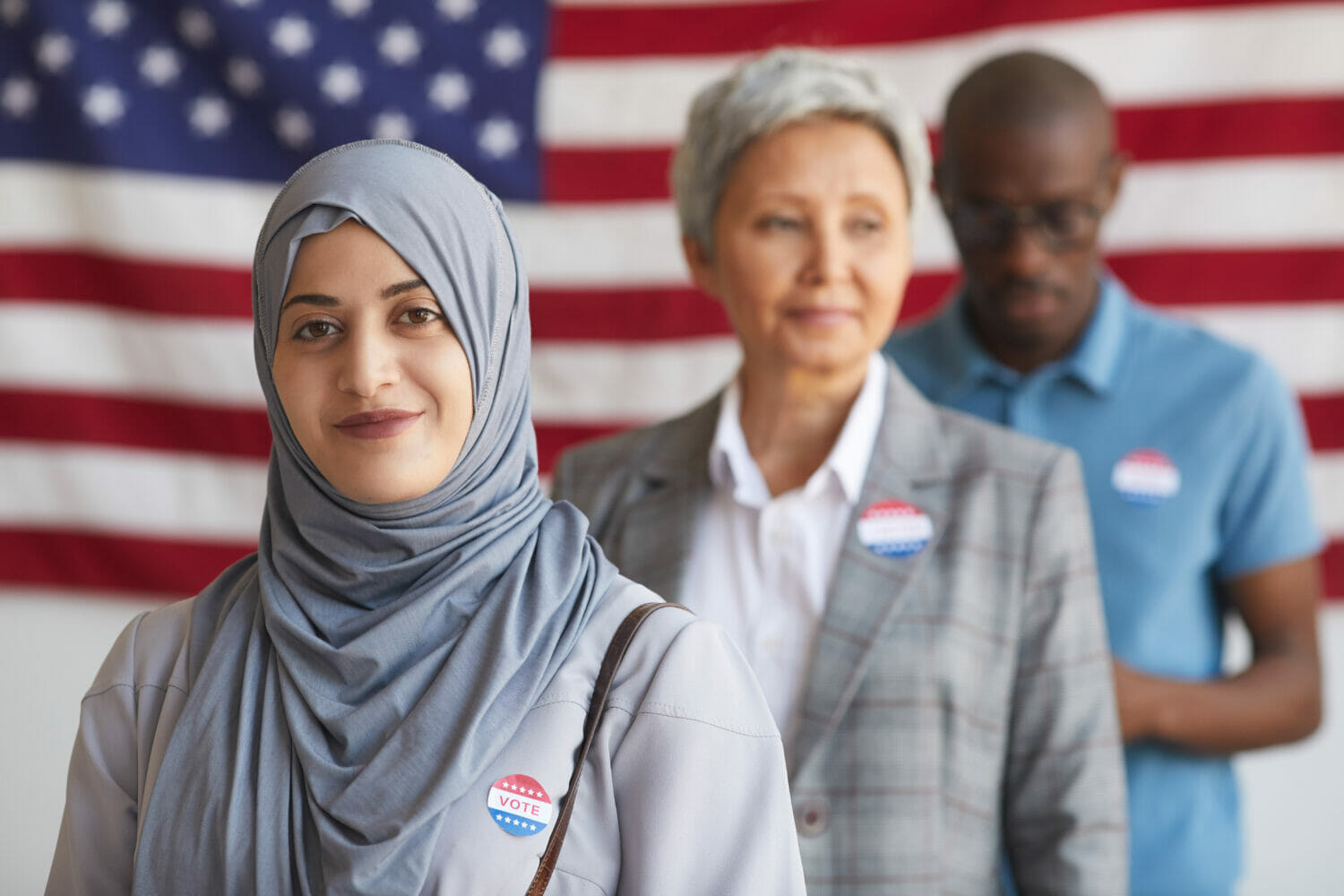 Have you noticed it’s a presidential election year? Between the nonstop news coverage, the blanketing of political advertising and the robocalls (so many robocalls!), it might be easy to become overwhelmed by all the noise and lose sight of what is really happening: It is that time of the year when everyone who can, should exercise their suffrage and vote.

Although nearly 300,000 aspiring Americans won’t become U.S. citizens in time to vote in this year’s election, eligible immigrant voters are expected to have significant influence on this election cycle, in national, state, and even civic elections. Demographic shifts across the country, especially in the all-important swing states, have changed to create a new majority. No longer is the majority composed of non-Hispanic whites without a college degree.

According to research by the New American Economy, “the electorate in this year’s elections will be the most diverse and well-educated electorate in the history of the United States.” In 2000, non-Hispanic whites without a college degree made up the majority of the national electorate. But changes in many factors including education, birth rate, and even who is immigrating to the United States have created a more diverse electorate.

By 2018, non-Hispanic whites accounted for less than 50% of the total electorate, in part due to an increase in voting by Hispanic, Asian American, and Black/African Americans, including new immigrants who match these demographic categories registering to vote. Between 2010-2018, voting registrations among these groups increased by 15.3 million. Meanwhile, non-Hispanic white voters with a college education increased by slightly more than 8 million, while non-Hispanic white voters without a college education decreased by more than 5 million. The share of the electorate that is new immigrants also increased between 2010 and 2018 from 7.8 to 9.3.

Immigrants are expected to have “more electoral weight in this election than in the past,” per the New American Economy. The Pew Research Center found that in the 2020 electorate, more than 23 million foreign-born Americans are eligible voters, accounting for roughly 1 out of every 10 voters.

In states where outcomes are still unpredictable, such as Florida, Nevada, and Minnesota, immigrants’ share of the electorate grew by a larger percentage than it did nationally. Nationwide, eligible immigrant voters’ share of the electorate grew by 1.5 percentage points, but the increase in Florida was by 2.7 points, meaning over 2.4 million new Floridians are eligible to vote in this election, which, according to Pew, accounts for 16% of the state’s total electorate.

Immigrants bring a higher level of education to states’ electorates

Immigrants also contributed to another demographic shift — the increase in college-educated voters during the same time period from 2010 to 2018. This was one of the biggest changes in electorates across states. Overall, the share of the national electorate with a college-level education grew by 4.2 percentage points. This increase is in part attributable to the fact that immigrants are as likely to have a college degree as American-born citizens, with 30% of immigrants possessing at least a college-level degree compared to 31% of U.S. born citizens. Some of the states that saw an above average increase in education also saw the greatest increase in immigrant share of the electorate, including Massachusetts, Maryland, Oregon, North Carolina, Virginia, Colorado, Nebraska, and Utah. 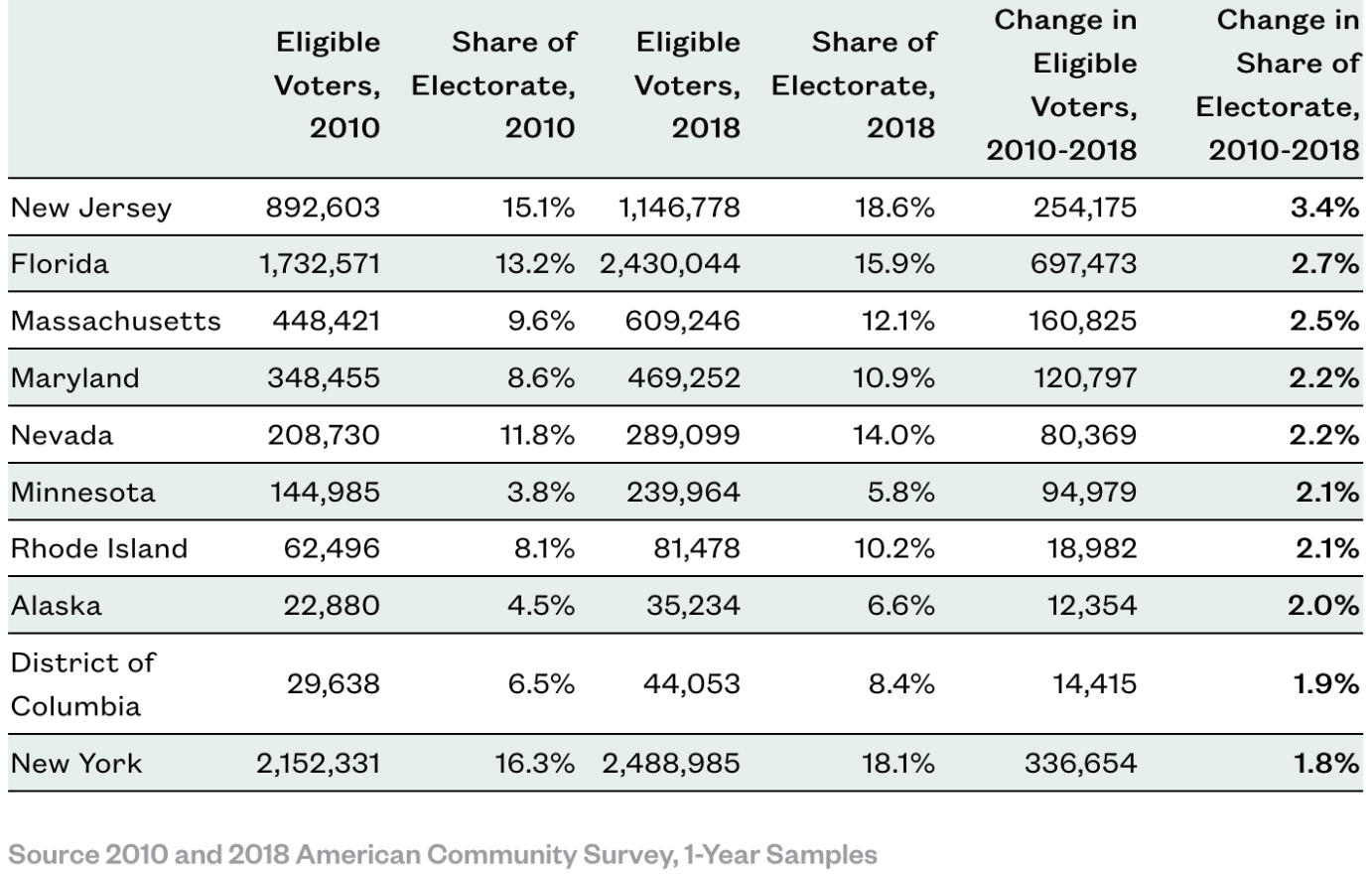 Vote.org list of registration deadlines and links to state by state information.

This tool allows voters in all 50 states to enter their address and learn more about the candidates and measures on the ballot.