Though this month’s inflation report shows that prices are beginning to cool, inflation is still very much on the minds of most Americans. The Federal Reserve (often called “the Fed”), has been attempting to snuff out inflation without triggering a recession.

Labor shortages have stretched businesses thin across industries in the U.S. for at least the past year, and by July there were 10.7 million open jobs in the U.S., with an unemployment number of only 5.7 million — a shortfall of nearly 2-to-1. This means that even if every American in the workforce went back to work today, there would still be approximately 5 million open jobs.

Goldman Sachs said in April that to get inflation down to the Fed’s 2% target, the gap between open jobs and available workers would need to shrink by about 2.5 million. The Fed’s methods so far have been to raise interest rates to kill wage growth. This also ends up slowing business expansion and reducing the number of new jobs.

There are several reasons for the shortages, from the “Great Resignation,” to the closure of schools, and the collapse of the childcare and elder care industries, which especially impacted women and mothers. The COVID-19 pandemic itself also played a large role, shuttering or disrupting businesses and resulting in the deaths of over one million Americans, 25% of whom were of working age.

However, there is one reason for the shortage we can fix, and that’s the lack of immigrant workers. 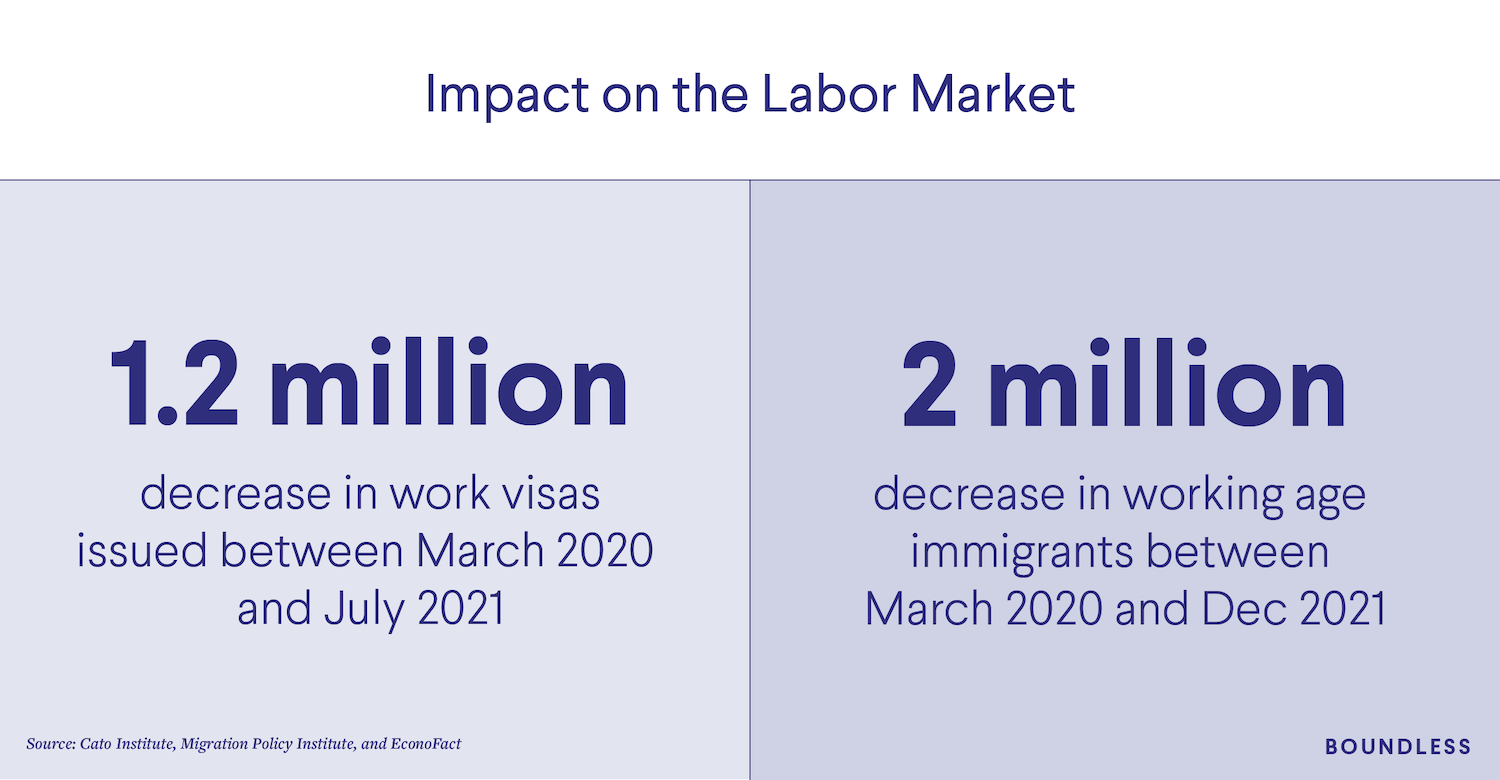 From March 2020 until July 2021, the U.S. government issued about 1.2 million fewer visas to adult immigrants, refugees, and temporary foreign workers, compared to the period of March 2018 to July 2019, before the pandemic. By the end of 2021 there were about 2 million fewer working-age immigrants living in the United States than there would have been if the pre-2020 immigration trend had continued unchanged.

As an example, the U.S. agricultural workforce is 73% foreign-born, while immigrants make up less than 14% of the total U.S. population. This extreme over-representation in the industry is a consequence of the shrinking agricultural workforce going back decades, as many Americans left farm work or rural communities altogether. From 2002 to 2014, the total number of full-time farm workers hired by farms declined by nearly 22 percent. 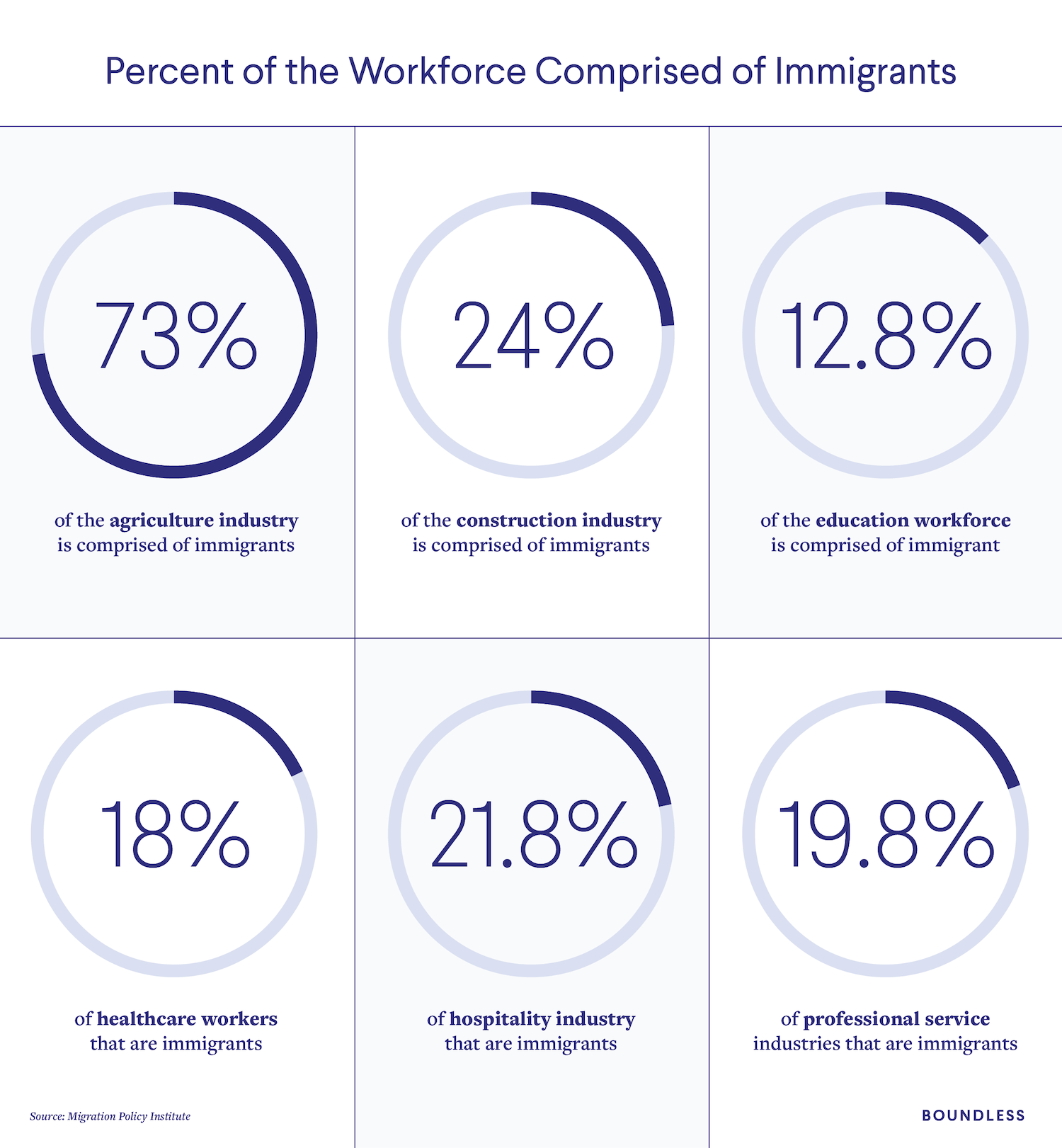 Meanwhile, farmers around the country are finding it impossible to hire enough field and crop workers to harvest the food we eat. In California in 2017, an estimated $13 million of strawberries, broccoli, leafy greens, and other unharvested produce were plowed under when there were not enough workers to harvest them. The last time dairy farmers in Idaho reported having enough workers was in 2012. Florida’s watermelons rotted in the fields in 2020 when the workers the farms needed to harvest the crops were held up at the U.S.-Mexico border. In July 2022, there were 30,000 open full-time farm jobs in the state of Wisconsin alone.

As labor shortages increased, the reliance on immigrant workers in the farming industry grew, including those hired through the H-2A visa program as temporary agricultural workers. The H-2A program allows farmers who cannot hire enough American workers to petition for temporary foreign workers. The program has seen an 87% increase in applications from 2015 to 2020, with 256,000 H-2A workers hired in 2019, according to the Department of Agriculture.

However, the status only allows for seasonal workers, permitting immigrant employees on H-2A visas to stay and work only ten months, even though many producers, such as livestock and dairy farmers, need workers year-round. For these reasons, 47 percent of farmers report being “not at all satisfied” or only “slightly satisfied” with the H-2A program, largely because it doesn’t meet farmers’ needs, while also being incredibly time-consuming and expensive.

According to a recent report from Texas A&M University, increasing the number of immigrant farm workers can reduce food prices and raise wages. Despite this, DOL has proposed a rule that would make hiring even harder for U.S. farmers by adding additional paperwork and steps that could add nearly seven months to the H-2A application process.

As Sam Peak noted in a piece for the Wall Street Journal, farmers have to take “70 separate application steps and abide by more than 200 rules” to comply with the H-2A program, along with paying fees that add up to “more than $10,000 to bring over one agricultural worker—even if that worker was previously hired by the same employer.”

The serious shortage of farm and crop workers in the U.S., coupled with the cost, delay, and difficulty for farmers of hiring H-2A workers all serve to drive up grocery prices, while also exacerbating the gap between available jobs and available workers that Goldman Sachs noted would need to close to bring inflation under control.

Rather than proposing rules that will make it harder for farmers to hire the people they need, thus harming U.S. and foreign workers while also exacerbating labor shortages and inflation, the Biden administration should work with Congress to pass the Farm Workforce Modernization Act (FWMA), which is currently being negotiated in the Senate after having already been passed by the House twice.

FWMA would allow more farmers to hire H-2A workers year-round, rather than only for short-term work. The bill would also provide a pathway to legalization for some farm workers — a path that does not currently exist for H-2A visa holders. FWMA would be a much-needed update to the current farm workforce recruitment system in the U.S., which many believe has led to higher food prices, particularly for dairy, meat, and vegetables.

With nearly two open jobs for every American worker, immigrants would not be taking jobs from Americans, but rather doing desperately needed work. Allowing immigrants to fill some of these open jobs — both in food production and across the economy at large — would reduce food costs, ease labor shortages, and slow down inflation.