September 11th changed the world, marking the end of an era of relative openness and optimism in global affairs. For travelers and would-be travelers and immigrants to the United States, the effects of 9/11 were especially pronounced. The creation of the Department of Homeland Security (DHS) in 2002, which would come to house not only immigration and customs functions, but also counterterrorism and the Secret Service, reflected a major change in U.S. immigration policy. Instead of viewing immigration through a lens of economics and foreign policy, the United States came to view immigration mostly through a lens of security and risk.

At Boundless, we analyzed publicly available data to show how September 11 changed the landscape for legal immigration and travel.

Prior to September 11, 2001, many political analysts believed that comprehensive immigration reform was imminent. Former U.S. President George W. Bush and Mexico President Vicente Fox were engaged in negotiations for an immigration agreement that The New York Times called “one of the biggest changes in immigration policy in the past quarter-century.”

During the 2000 presidential election, Bush campaigned on his support for creating a pathway to citizenship for undocumented residents, the expansion of a guest worker program, and expedited processing for immigration applications.

But September 11th revealed significant flaws in the U.S. immigration and visa system. All 19 9/11 hijackers arrived in the United States on tourist, business, or student visas; 4 had overstayed their visas and several had presented false passports or made detectable false statements on their visa application. The fact that those responsible for 9/11 had entered the United States without detection caused the American public to distrust whether the government was adequately vetting potential visitors and immigrants to the country.

Although most visitors and immigrants pose minimal risk to American security, public opposition to immigration of all forms rose sharply following 9/11. According to the Migration Policy Institute, the negotiation for a U.S.-Mexico bilateral migration agreement collapsed almost immediately.

As Peter Andres, professor of international studies at Brown University wrote in 2003, “Optimistic talk of opening borders has been replaced by more anxious and somber talk about ‘security perimeters’ and ‘homeland defense.’” President Bush largely abandoned his efforts to increase and streamline legal immigration to the United States, focusing instead on the creation of the DHS, and other counterterrorism measures. 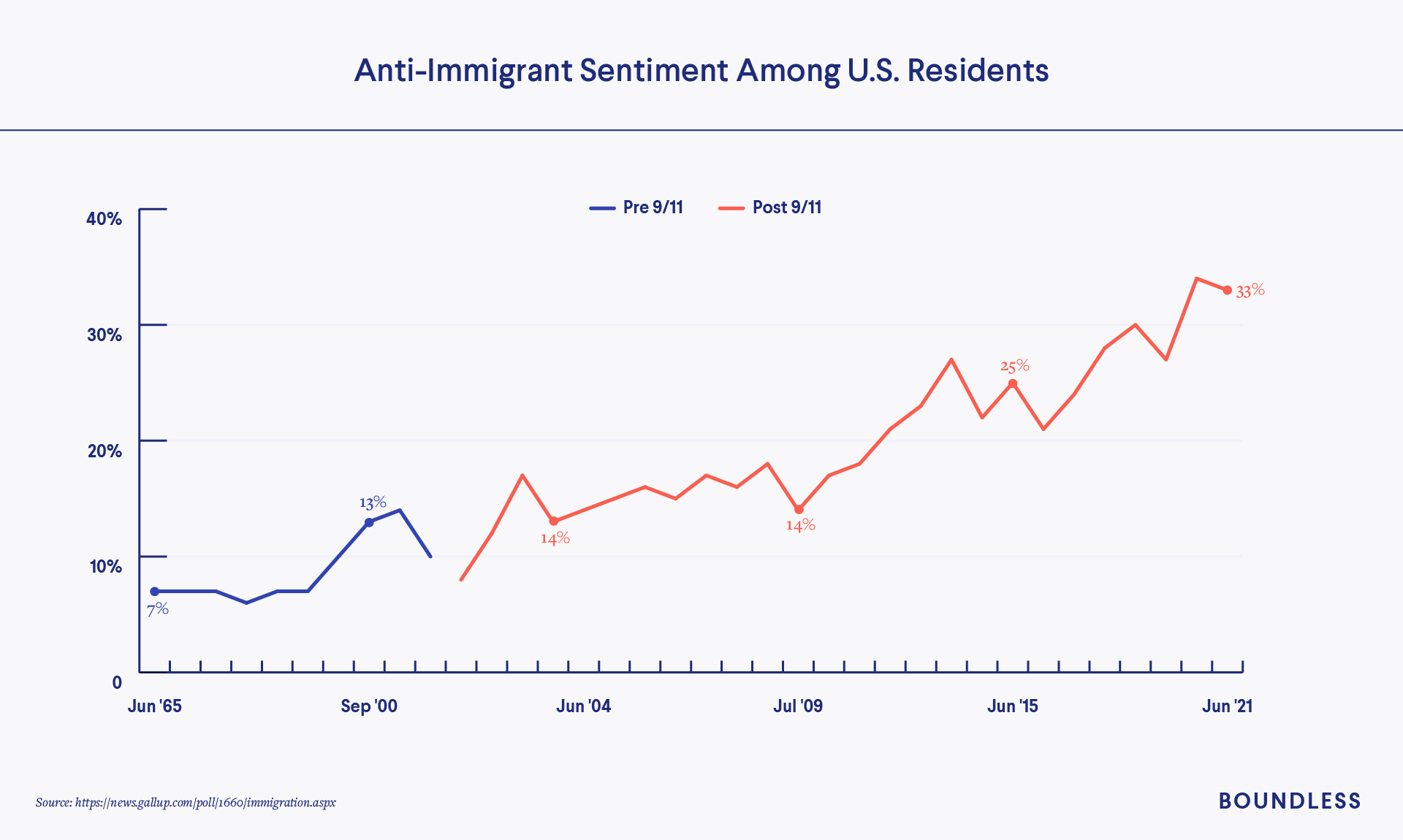 Hardening the U.S.-Mexico and U.S.-Canada Borders

By the early 2000s, trade between the U.S. and Mexico and the U.S. and Canada exceeded $600 billion annually. Goods ranging from agricultural commodities to automobile parts are transported daily across land borders at ports of entry along the northern and southern U.S. borders. For many residents of border communities, like San Diego-Tijuana and Detroit-Windsor, cross-border travel for work, education, or family is a part of daily life.

On September 11, the Treasury Department placed the U.S. borders on a Level 1 alert, requiring an inspection of every vehicle and person entering the country. Wait times for cargo trucks at the border increased from 1-2 minutes, to 10-15 hours. The Ford Motor Company temporarily closed plants in Detroit and Windsor because of the difficulty transporting parts. Travel immediately plummeted, and the Migration Policy Institute found that the heightened border security caused further decreases in travel over subsequent years. 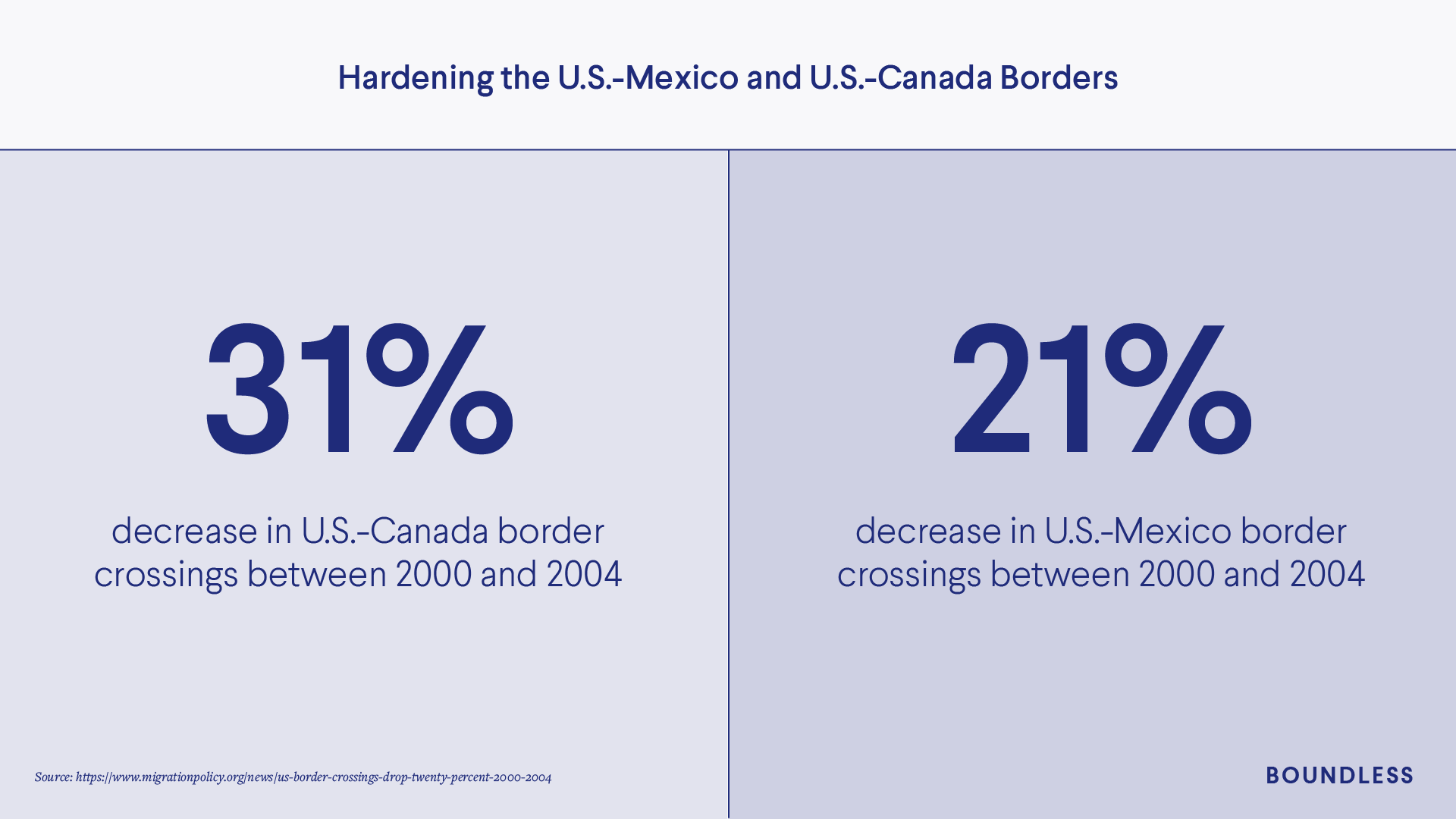 In October 2001, President George W. Bush issued a directive calling for the end of “abuse of student visas.” The directive required colleges and universities to participate in the Student and Exchange Visitor Information System (SEVIS) by submitting detailed information about each foreign student to the U.S. government. The U.S. Department of State scrambled to implement the new system, and, according to media reports, many students experienced major delays in visa issuance, or unexplained denials.

Students in fields considered sensitive to national security were subject to heightened scrutiny; in practice, this policy applied to most STEM (Science, Technology, Engineering, and Mathematics) students, as well as less expected fields like urban planning and landscape design. Consular offices were instructed to flag these prospective students for a Visa Mantis check, a system designed to assess the risk of sensitive technology transfer. Some critics, like Princeton University President Shirley Tilghman, criticized this system as casting an overly wide net, including too many academic fields, and contributing to delays in visa processing.

International student applications and enrollments fell after 9/11, which the Council on Graduate Schools attributed to the changes in visa policies, the perception among prospective students that the United States was less welcoming, and heightened global competition for students. A recent Boundless report found that a challenging social and political climate has continued to hurt U.S. colleges and universities seeking to recruit international students. 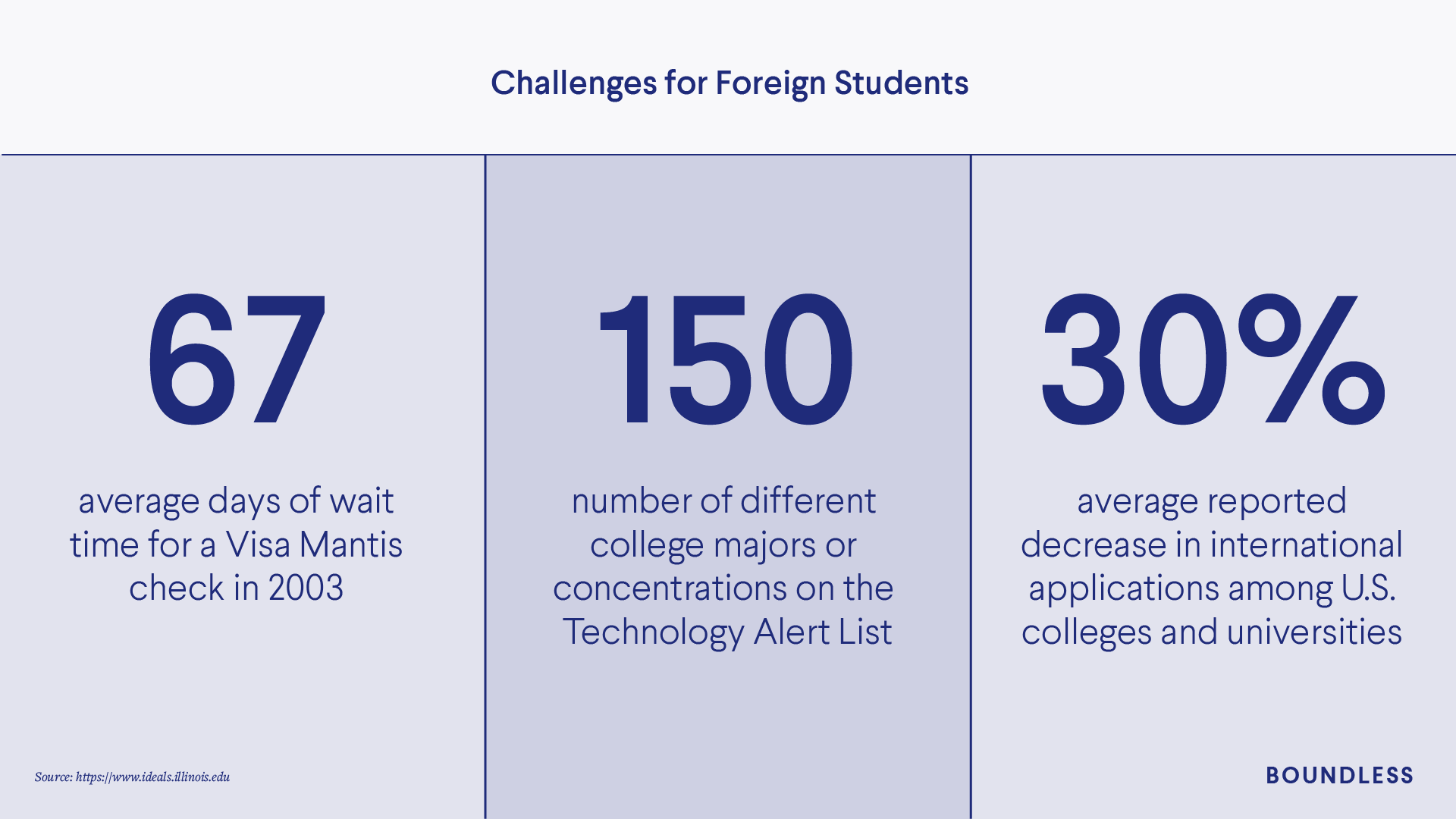 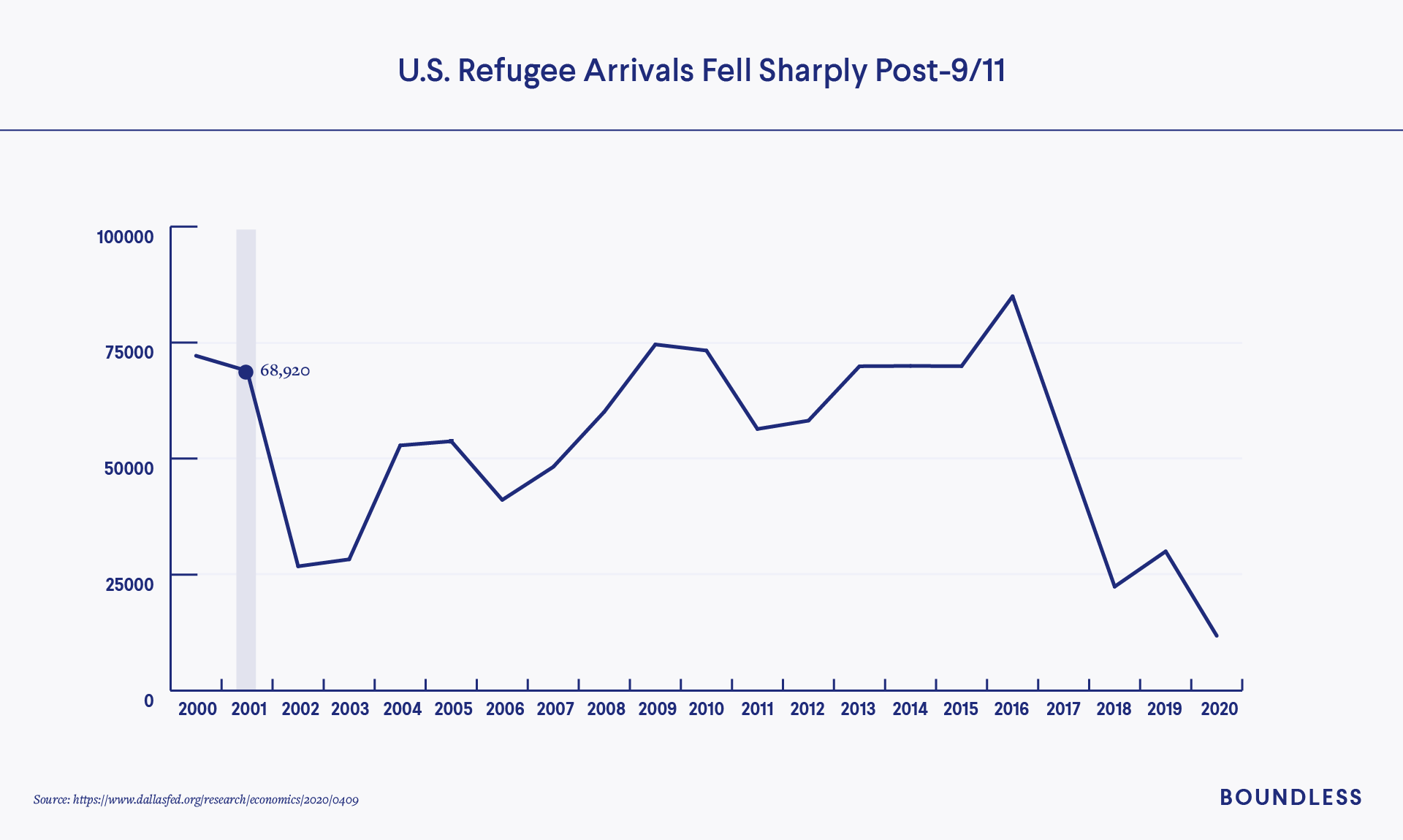 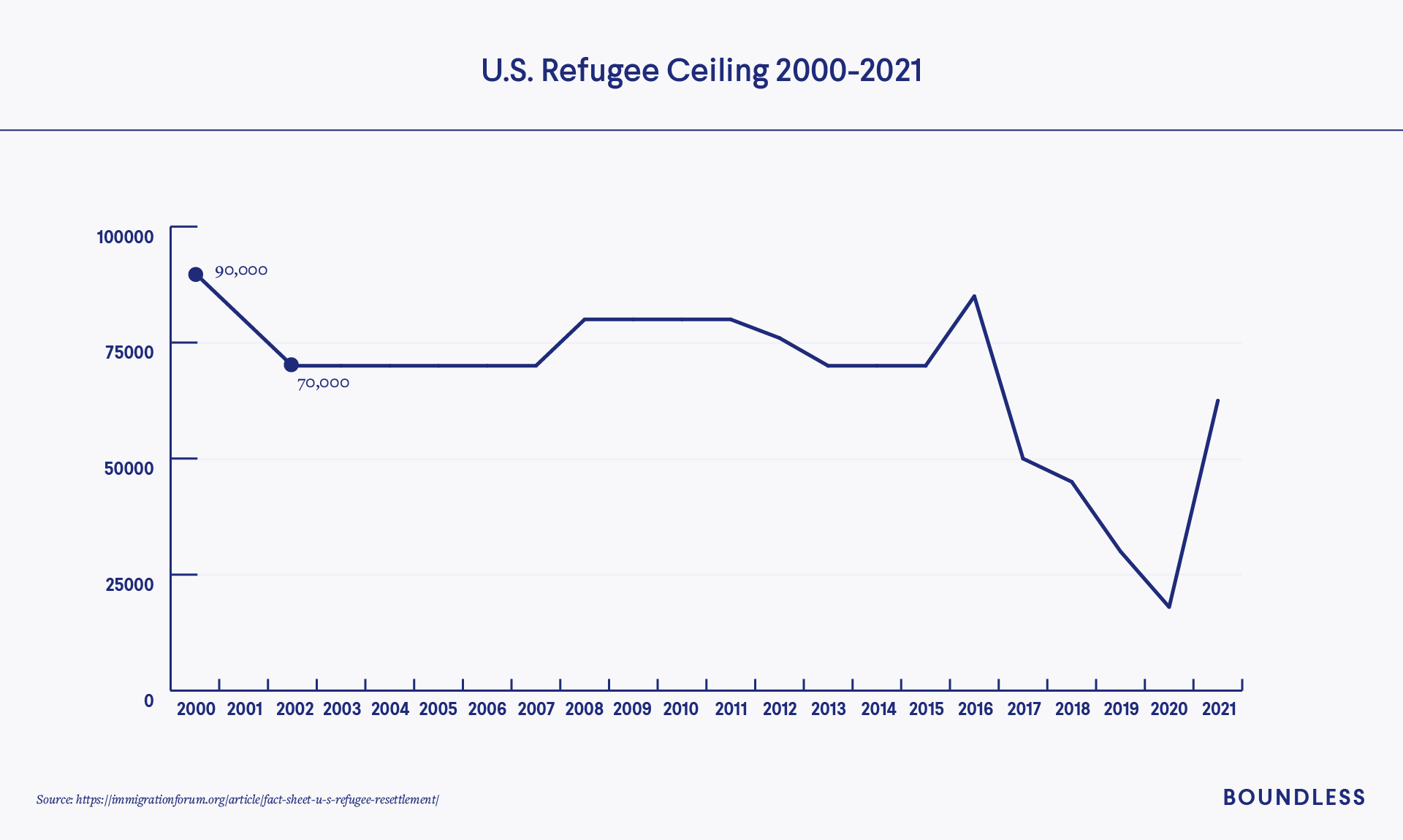 Although former Presidents George W. Bush and Barack Obama both worked to rebuild the refugee resettlement system after its post-9/11 challenges, the fears stoked by the attacks set the stage for further curtailment of refugee resettlement under former President Donald Trump, particularly for refugees from Muslim-majority countries including Somalia, Syria, and Yemen. On May 3, 2021, President Joe Biden raised the refugee cap from 15,000 to 62,500, a level which seems to reflect lingering hesitation about the degree to which the U.S. should be open to those fleeing persecution and violence.

In 2002, the U.S. government launched a program called the National Security Entry-Exit Registration System (NSEERs). From 2002 until 2011, visitors from designated countries had to be registered, fingerprinted, and photographed when they arrived in the United States. Male immigrants and visitors who were already in the United States when NSEERs was launched in 2002 were also required to participate in a call-in registration system as a part of the program.

The NSEERs system posed a number of challenges for travelers from North Korea and the Muslim-majority countries that appeared on the list. Travelers could only enter and exit the United States from a list of designated airports, rather than choosing the airport most convenient for their destination. A 2012 report by the Office of the Inspector General of DHS concluded that NSEERs was largely ineffective, recommending that the Department should focus scrutiny based on specific information about individual security threats, rather than conducting broad interrogations based on national origin. 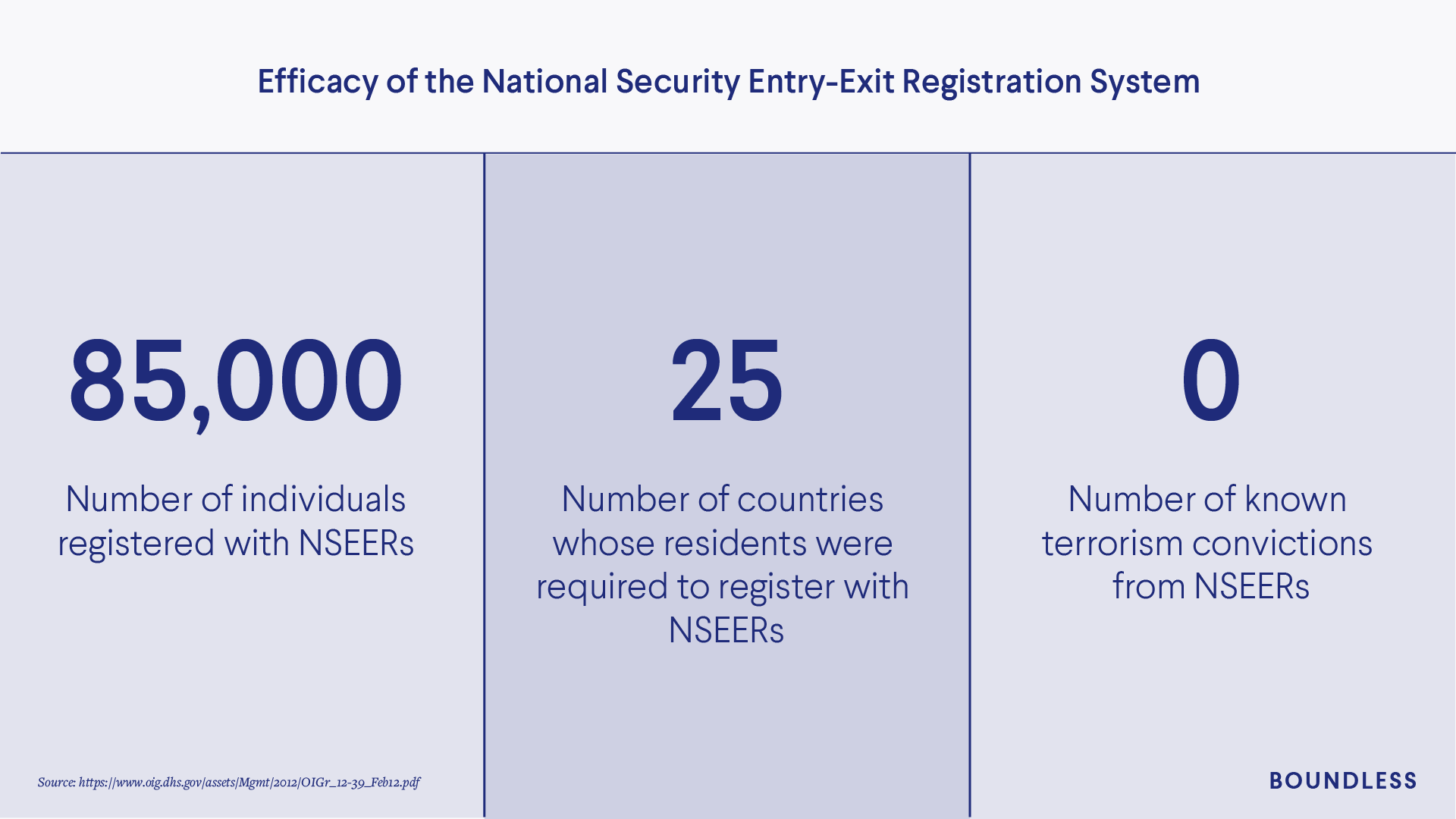 Wars in Afghanistan and Iraq

September 11 led the United States to launch the “War on Terror.” After Congress passed a Joint Resolution authorizing the use of force on September 18, 2001, President George W. Bush initiated armed conflicts in Afghanistan (2001) and Iraq (2003). 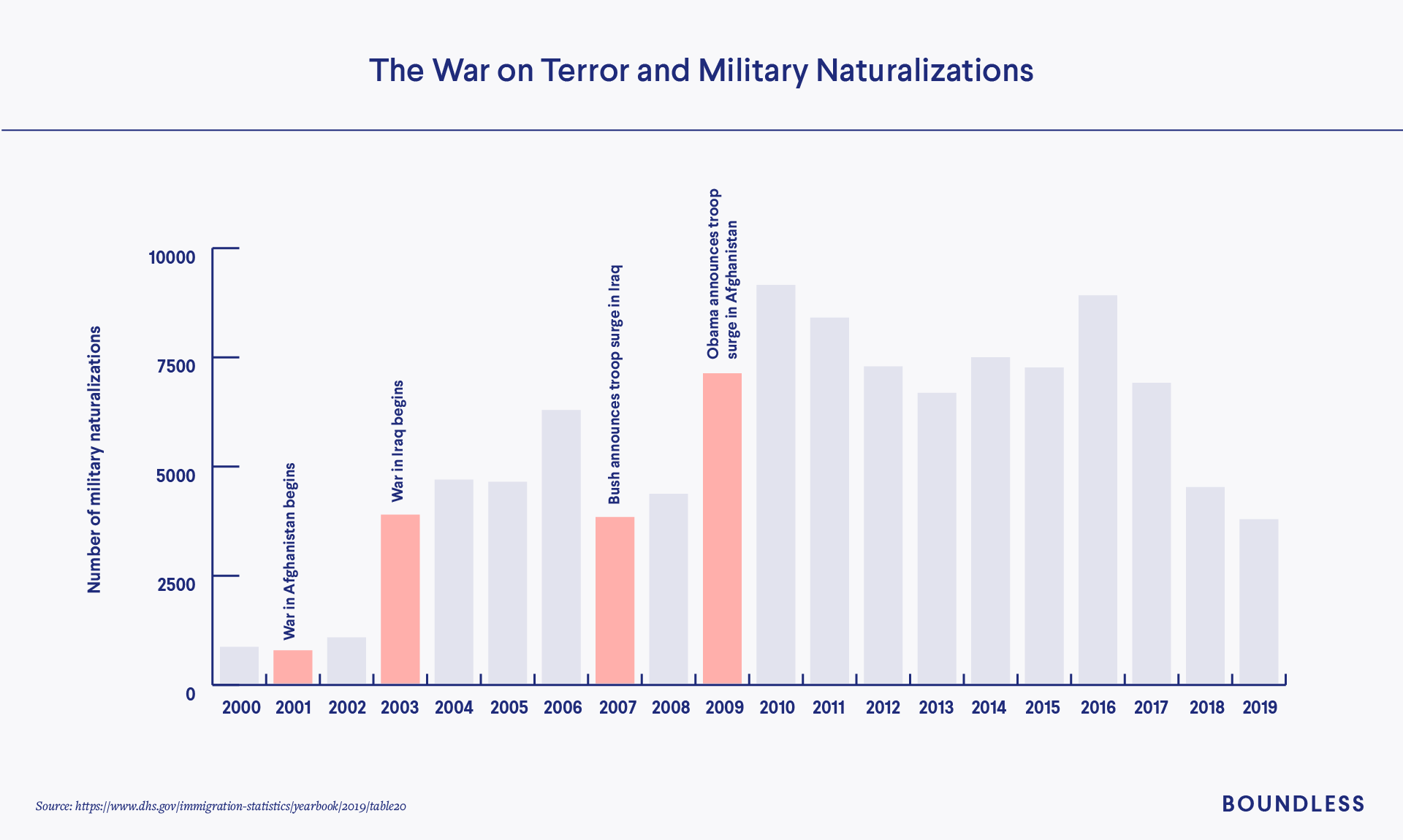 U.S. efforts in Afghanistan and Iraq were also supported by Iraqis and Afghans who risked their lives to serve as translators, interpreters, and in other required roles. In 2008 and 2009, Congress passed legislation to grant Special Immigrant Visas (SIVs) for certain Iraqis and Afghans and their families who worked on behalf of the U.S. armed forces. In August 2021, the U.S. Department of State announced a new Priority 2 refugee designation for certain Afghans and their families who provided support to the United States, but who did not meet the criteria for SIVs. Typically, to meet the definition of “refugee,” a person must be considered to have a credible fear of persecution on the basis of their religion, race, or group membership; the Priority 2 refugee designation reflects the fact that Afghans who cooperated with the U.S. government agencies similarly face credible fear of persecution, and grants them a relatively high priority ranking among groups eligible for resettlement.

The U.S. government has faced criticism for not making enough SIVs available, and for long backlogs in SIV processing. Some media accounts detail years-long wait times and unexpected denials under the SIV programs. The Department of State has said that SIV interviews were halted from March 2020 through January 2021 as a result of the COVID-19 pandemic, leading to a backlog of at least 17,000 when President Biden took office. 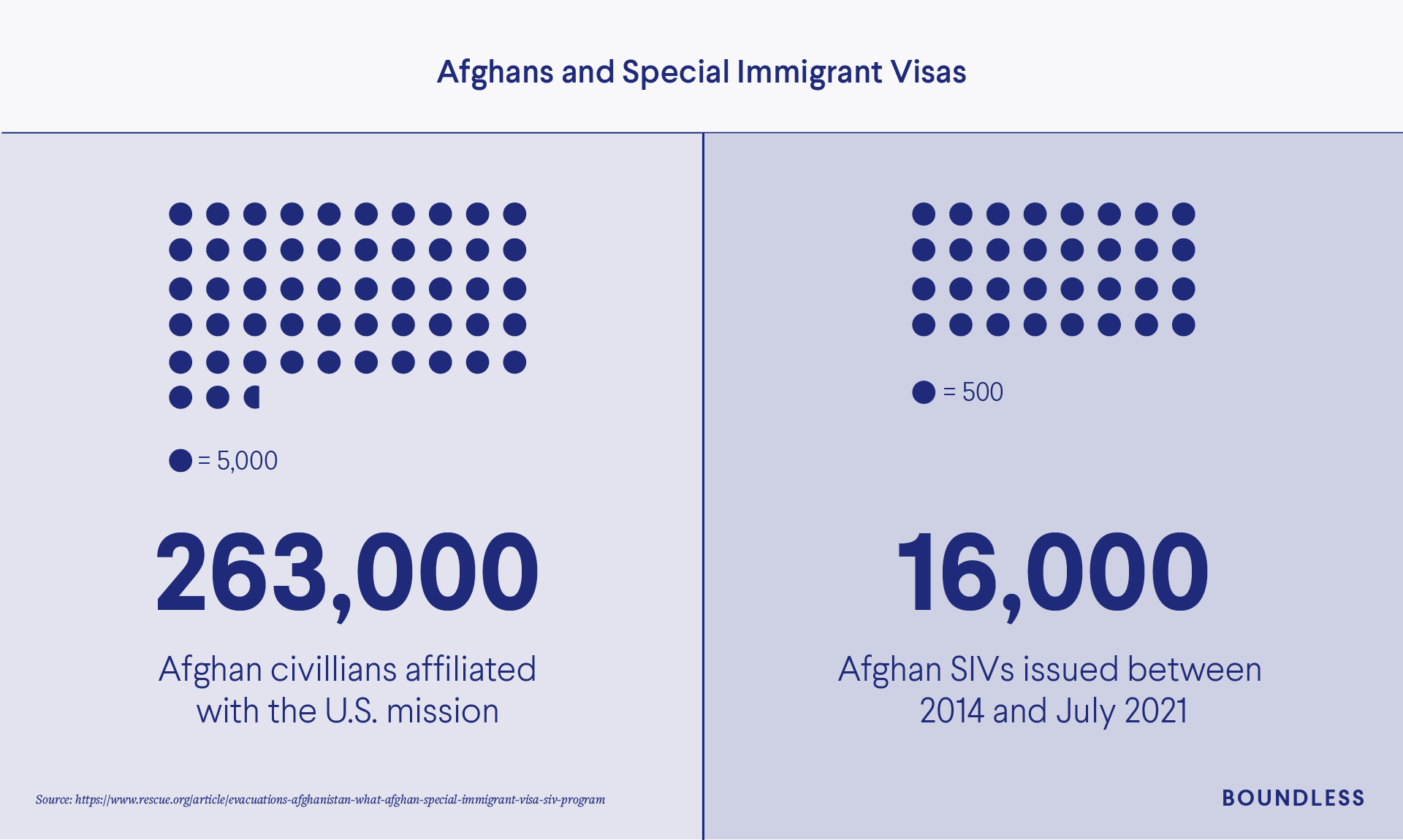 At the time this report was written, the situation with respect to Afghan refugees and SIV applicants was rapidly evolving, as the U.S. attempted to evacuate thousands of SIV applicants and refugees from Kabul after the Taliban seized control of the city.

Changes to the Visa Waiver Program

There are two pathways for vetting travelers to the United States: the visa adjudication process, and the Electronic System for Travel Authorization (ESTA) process. Using ESTA, travelers from 39 countries that are a part of the Visa Waiver Program (VWP) can be digitally screened for entrance without requiring an interview or onerous application, for trips that are up to 90 days long.

Before 9/11, in order for a country to participate in the U.S. Visa Waiver Program, its visa refusal rate had to be below 3 percent. As a part of the Implementing Recommendations of the 9/11 Commission Act of 2007 (better known as the 9/11 act), Congress made changes to these guidelines.

In order to encourage more countries to actively cooperate with U.S. antiterrorism goals, the 9/11 Act allowed countries to participate in the VWP with visa refusal rates between 3 percent and 10 percent, if those countries agreed to participate in information sharing and counterterrorism initiatives. Eight countries joined the Visa Waiver Program in 2008 as a result of this policy change. 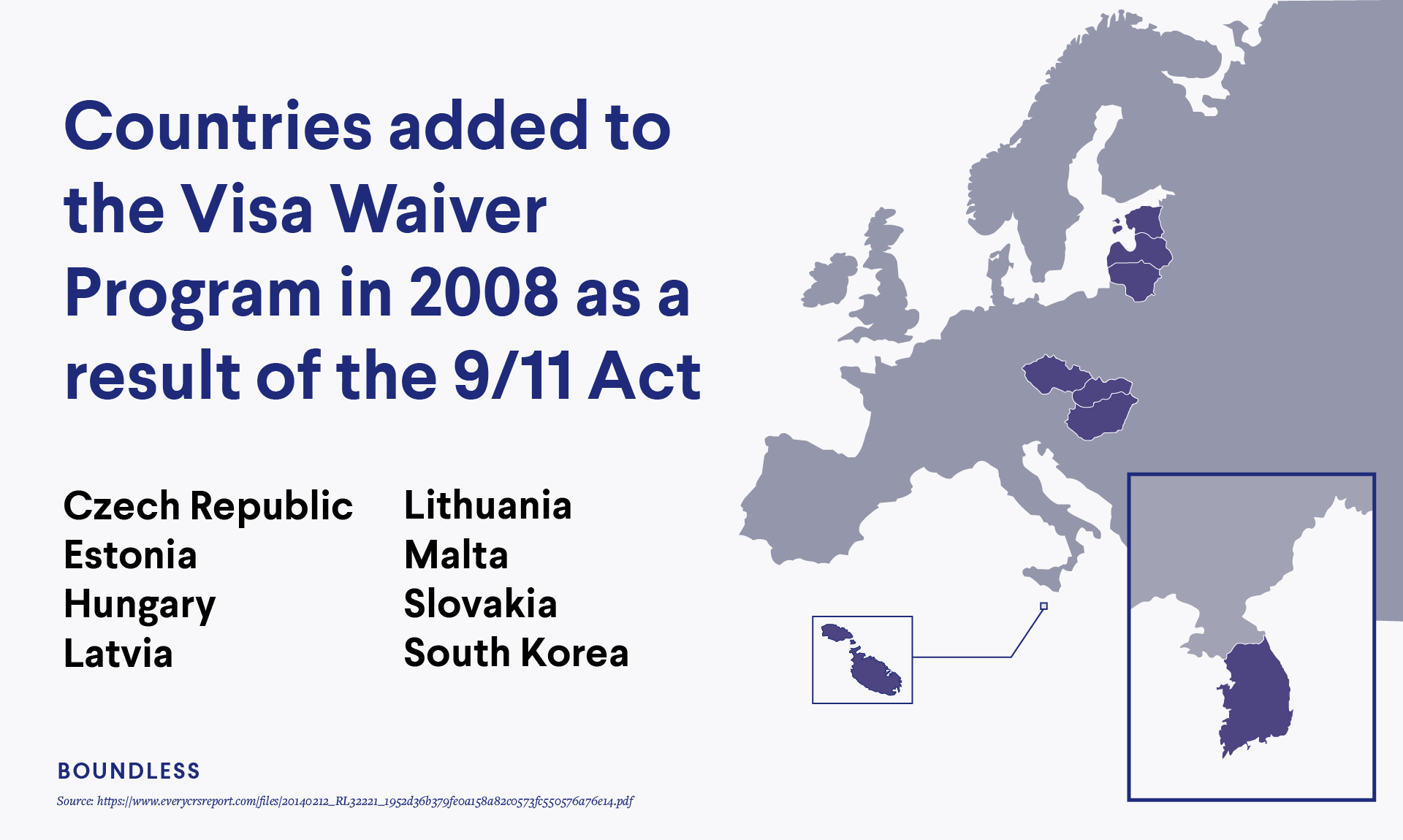 Starting in 2009, biographic information was required for all VWP travelers. The 9/11 Act also required VWP countries to promptly report lost or stolen passport information to Interpol.

Before 9/11, interviews for B-1 and B-2 visitor visas were often waived; the passage of the Intelligence Reform and Terrorism Prevention Act of 2004 required these interviews be conducted except in certain limited cases.

In November 2005, U.S. Citizenship and Immigration Services (USCIS) announced that they would move from paper-based records to an electronic system to improve security. After reports of serious errors and delayed adjudication, that effort was abandoned in 2015. As of 2021, only 40% of USCIS filings receive fully-digital handling. Particularly in light of the COVID-19 pandemic, USCIS has revisited their digitization agenda; a USCIS ombudsman report from June 2021 indicates that the agency intends to establish electronic filing procedures for all immigration forms by 2026. Ur Jaddou, who was confirmed by the Senate to lead USCIS in July 2021, has pledged to modernize the agency and “resolve dramatically increasing processing times and backlogs, and utilize 21st-century tools.”