Joe Biden took office a little more than one year ago with a pledge that reforming the United States’ broken immigration system was among his administration’s top priorities. On day one he reversed some of his predecessor’s more egregious actions, such as banning immigrants from Muslim-majority countries. He then unveiled a sweeping immigration agenda that proposed an 8-year pathway to citizenship for 11 million undocumented immigrants. The framework for a comprehensive immigration reform bill he sent to Congress was the most ambitious and expansive plan offered by any president in a generation.

These initial actions put the administration on a promising path, but Biden’s plans to overhaul legal immigration to the U.S. have hit roadblocks in Congress, as well as lingering issues such as the ongoing Covid-19 pandemic and years-long green card backlogs. Further, despite evidence showing that restrictive border policies such as the Trump-era Title 42 were actually driving repeat border crossings, CBP and media reports throughout 2020 and 2021 have focused on the supposed “record-breaking” number of southern border crossings in 2021, which has placed political pressure from some quarters on the administration to appear tough on border enforcement.

Despite the substantially higher number of actions taken by the Biden administration, however, several major Trump-era policies continue to hamper the U.S. immigration system and present barriers and obstacles for visitors, workers, families, and asylum-seekers.

As Biden prepares to deliver his first State of the Union address to Congress on March 1, 2022, Boundless takes a look at what actions Biden has taken on immigration so far, which of the former administration’s policies he’s successfully rolled back, and what’s still hung up in court.

Because the majority of government action taken on immigration is either executive action or agency rulemaking and policy making (the agencies themselves being part of the executive branch), Boundless has focused solely on executive orders and agency policies in this report. Further, this is not an exhaustive catalog of every immigration action taken by either the previous or current administration. Instead, this report focuses on actions that had the largest impacts on immigrant families, workers, and asylum-seekers.

Each tracker is organized by topic: 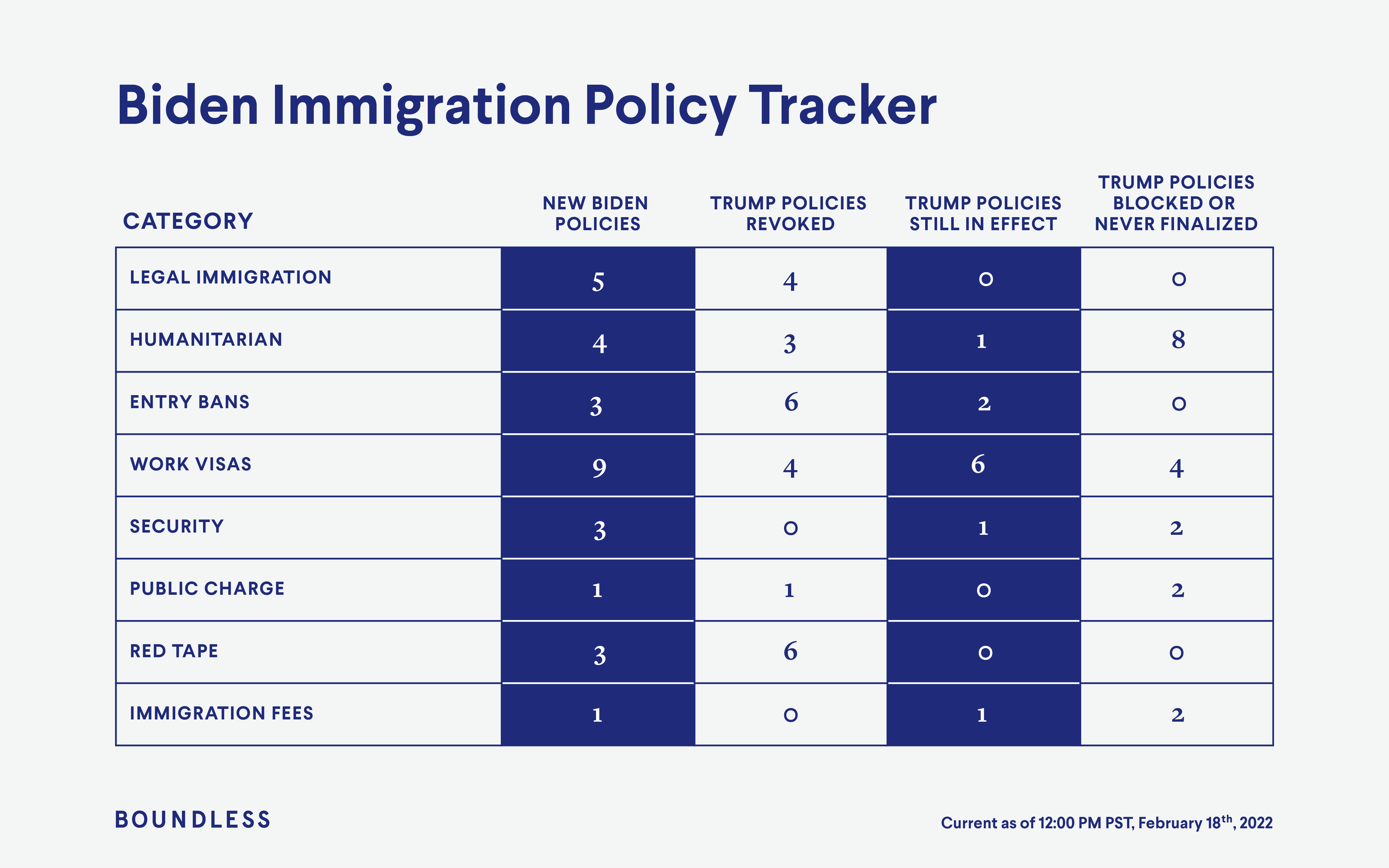 Biden has so far issued three executive orders related to legal immigration, but separate from more distinct categories like work visas or humanitarian relief. These included an Order preserving and fortifying the Deferred Action for Childhood Arrivals (DACA) program, and a top-to-bottom review of Trump-era policies restricting legal immigration. The administration also rolled back several Trump-era proposals, including reversing an enforcement memo against U.S. citizens trying to sponsor members of their family for green cards.

In late 2021 the Department of Homeland Security (DHS) proposed a rule that would largely codify the DACA program as it was originally created in 2012, in hopes of protecting it from future litigation or termination by executive action.

Since Biden took office, DHS has also returned to the previous version of the civics test used for people applying to become U.S. citizens through naturalization, and adopted a revised agency mission statement after the previous administration replaced the agency’s original mission statement, which made reference to America’s strength as a nation of immigrants, to one focused on border enforcement and “securing the homeland.” 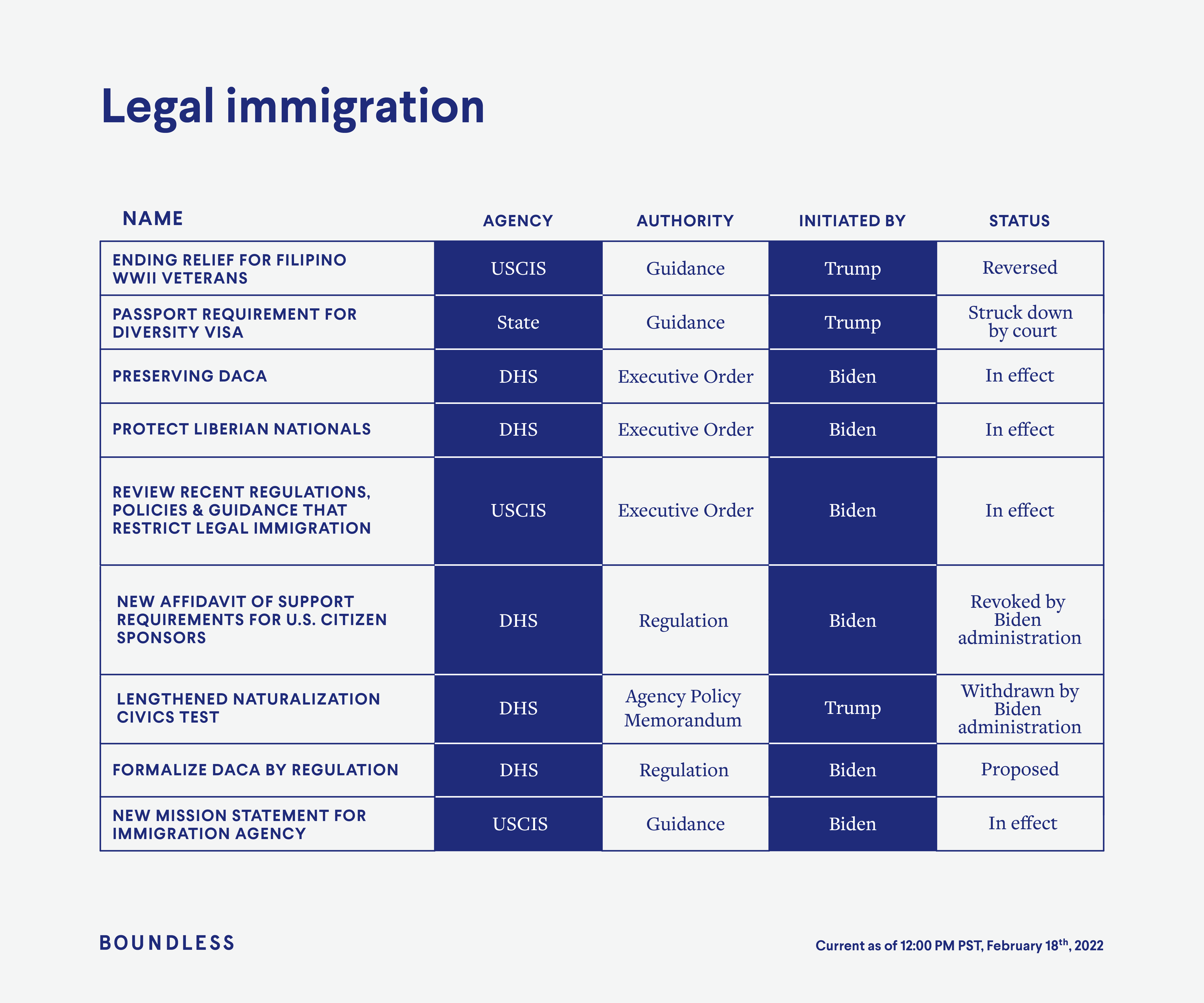 The Trump administration focused on systematically dismantling programs put in place to protect vulnerable people crossing the border. Biden swiftly reversed some of Trump’s actions, including taking actions to begin rebuilding the decades-old U.S. refugee program and creating a task force to reunify families separated at the border.

In other situations though, the administration chose to ratify some of the previous administration’s restrictionist rules, such as the rule removing the 30-day deadline for U.S. Citizenship and Immigration Services (USCIS) to process asylum-seekers’ work permit applications, or another rule that restricted work permits for asylum seekers by adding multiple new requirements. These rules were vacated by the federal district court in Washington, D.C., on February 7, 2022.

Other actions, such as the Trump-era requirement that asylum-seekers use a USCIS-provided interpreter at interviews, have continued during the COVID-19 pandemic but have end-dates slated for the near future, while the Security Bars and Processing rule proposed in 2020 to restrict asylum by expanding security concerns to include public health emergencies, have been delayed pending review or rescission. 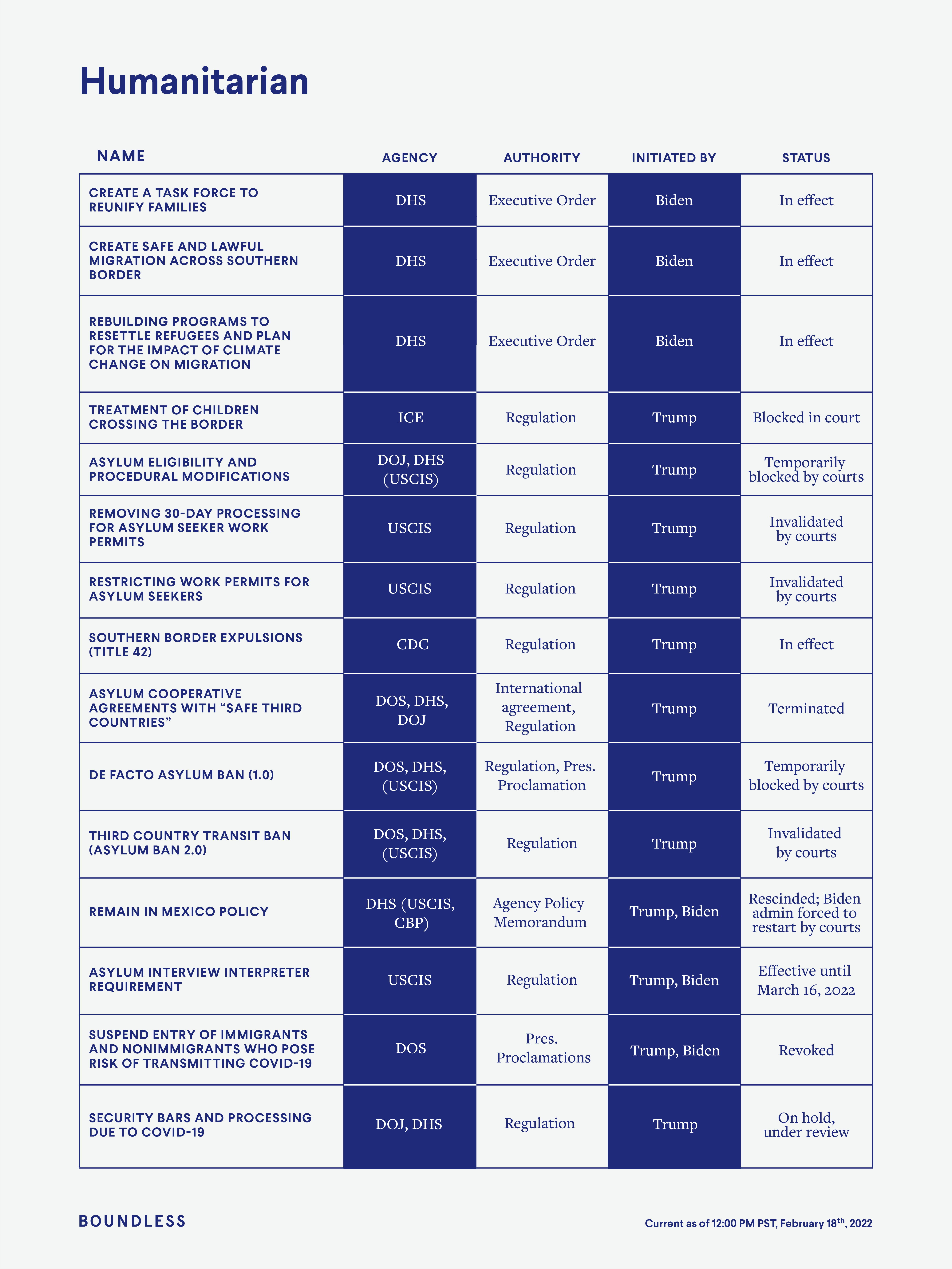 Trump’s first executive order as president was to ban immigrants from six Muslim-majority countries, a ban he later extended to include six additional countries, all with substantial Muslim populations and most located on the African continent. Biden reversed both those bans as well as one banning new green cards during the coronavirus pandemic.

Biden made notable progress in correcting some of the issues in the employment-based visa realm, undertaking nine actions via agency policies or the rulemaking process. DHS also rolled back 4 of 10 major Trump-era rules or policies related to work visas like H-1Bs, H-2As, and H-2Bs, released guidance to strengthen and expand STEM programs for students and researchers, and began a process for automatic work authorization extensions for spouses of H, L, and E visa holders. 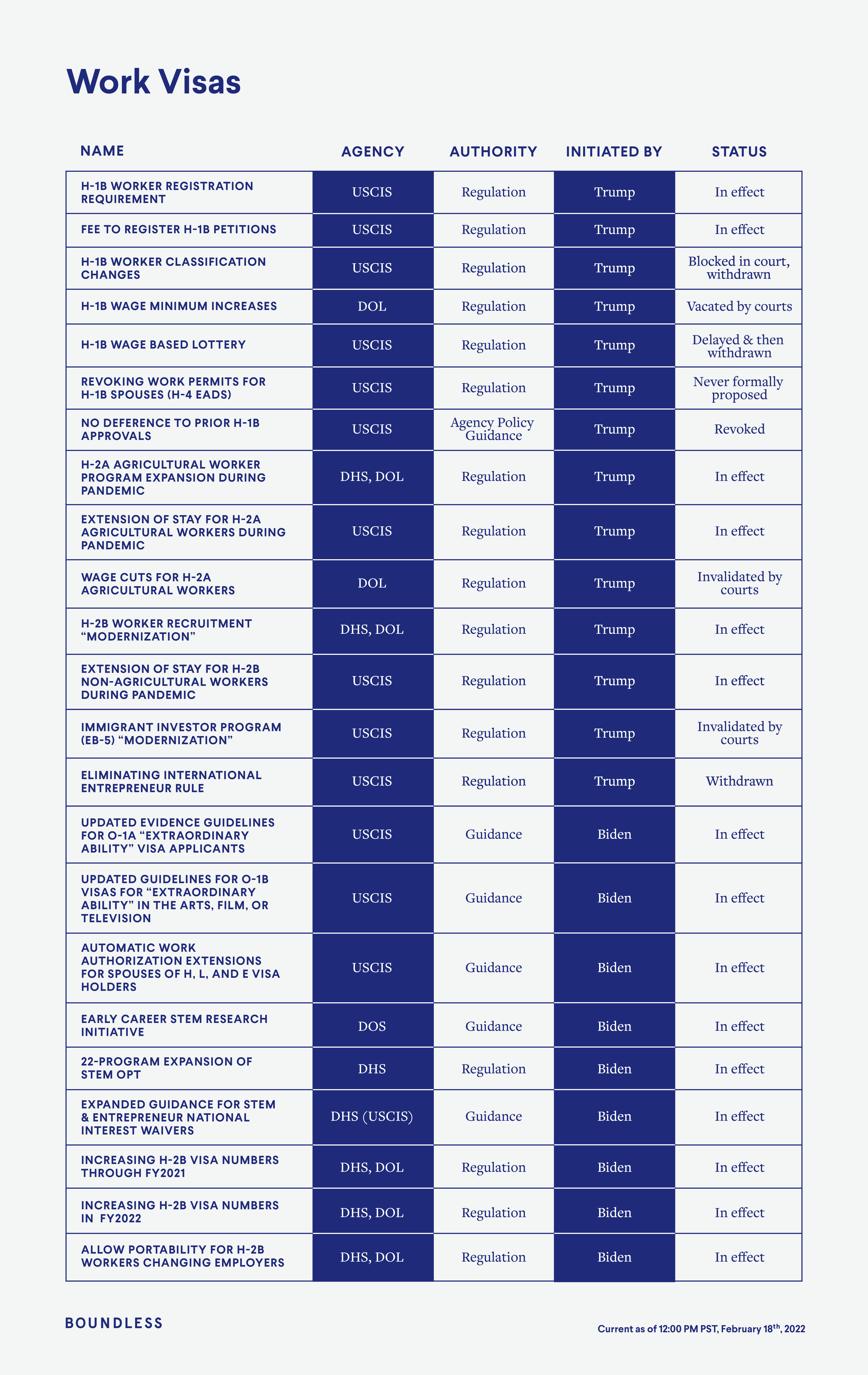 One of the cornerstones of Trump’s presidential campaign was to build a wall along the U.S.-Mexico border, and during his first month in office, he acted on that pledge, ordering construction to begin. Biden issued an executive order halting construction of the wall, calling it “a waste of money that diverts attention from genuine threats to our homeland security.”

In the year since, DHS has released several memoranda to Immigration and Customs Enforcement (ICE) reinstating the primacy of prosecutorial discretion, realigning interior enforcement priorities towards threats to public safety, national security, or the U.S. border, and preventing the detention of pregnant, breast-feeding, or postnatal mothers. 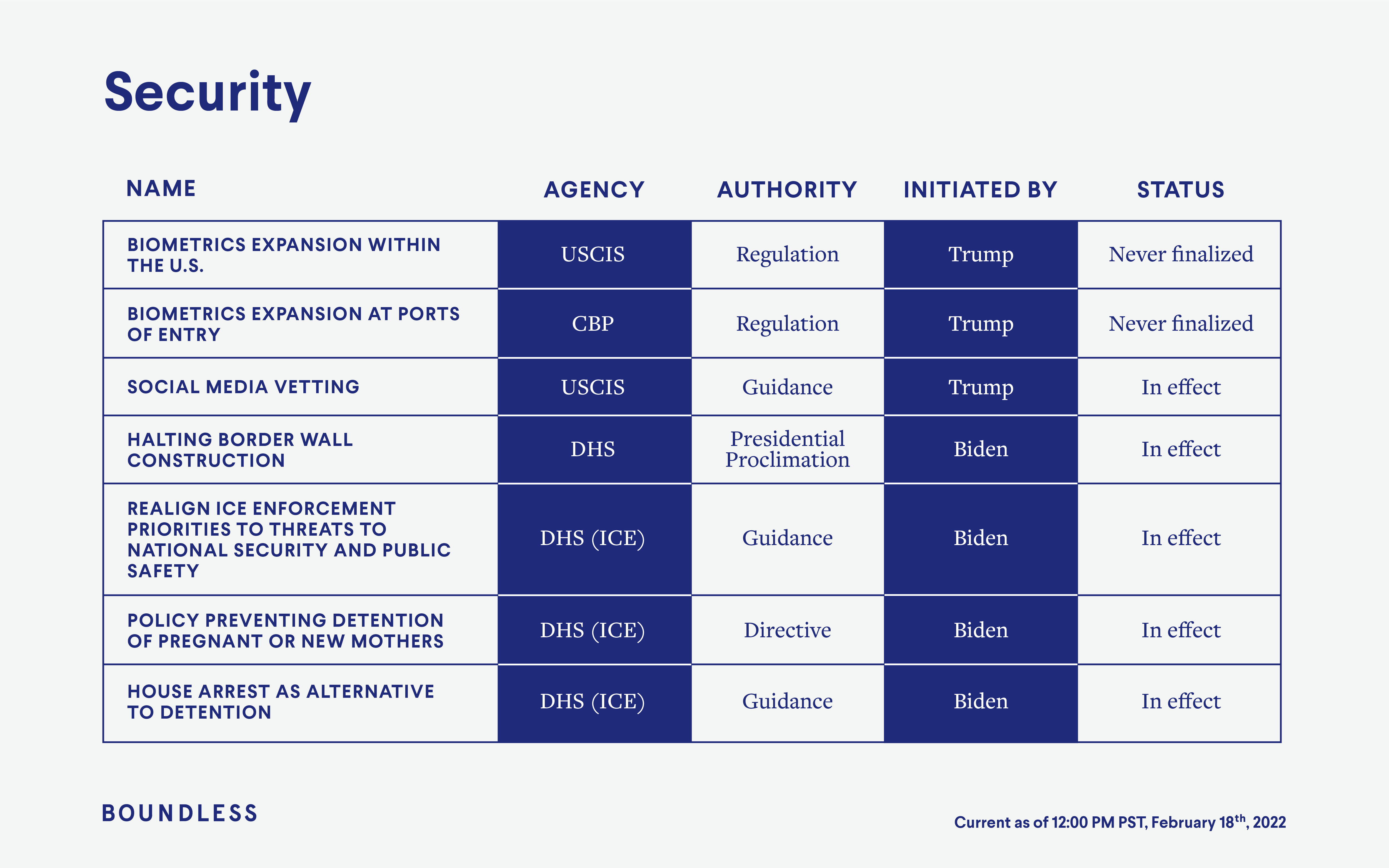 The 2019 public charge rule made it harder for people of color, elderly people, people with disabilities, and low-income people to obtain green cards and certain types of visas. Biden rescinded the Trump-era rule shortly after taking office.

DHS released a proposed rule that would codify the long-standing guidance on who “is likely to become a public charge” on February 17, with a forthcoming rule expected to be published in the Federal Register. Given that both DHS and the Department of State (DOS) have historically used the same public charge guidance, Boundless expects to see a DOS rule relating to public charge inadmissibility be published in the coming months.

A key strategy of the Trump administration was to add barriers to the immigration process, such as increased paperwork and unnecessary green card interviews. Many of the restrictive, Trump-era actions Boundless noted at the beginning of the Biden administration have since been rolled back, such as a bid to exclude undocumented immigrants from a key census count.

USCIS has also reduced some red tape by allowing certain applicants to reuse biometric measurements previously on file with USCIS when renewing or extending status or work authorization, and increasing the validity period of work permits issued to green card applicants from one to two years. 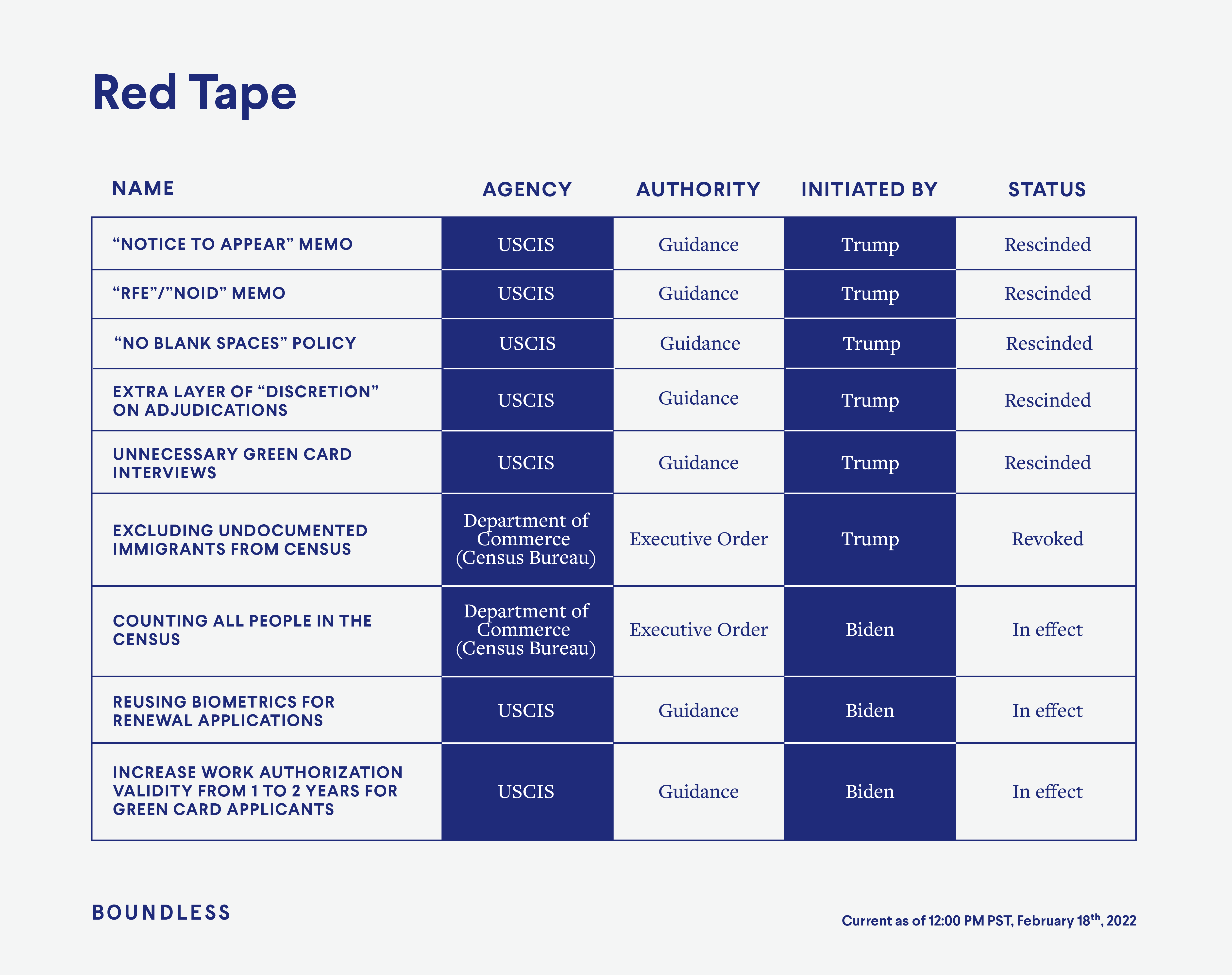 Immigration fees
In a move that alarmed immigration advocates and prospective immigrants, the Trump administration proposed significantly increasing immigration fees for green card and citizenship applications, in some cases more than doubling them. A federal court blocked the policy just days before it was set to go into effect, finding among other things that the rule would put low-income immigrants at a severe disadvantage.

Fee increases on U.S. passports since then have been in keeping with inflationary adjustments, and more adjustments to the USCIS fee schedule are expected in the coming months and years.