June was a blockbuster month for high-profile immigration developments. The Supreme Court made two announcements that could have a major impact on many people’s lives. Yet even those announcements were full of ambiguity—neither was a final decision on a case, just an agreement to review them later.

Uncertainty has consequences. We’re seeing a surge in demand for immigration lawyers and a drop in the number of people who want to come to the United States for work or study.

Here’s a summary of the month’s news, and what it means for immigrant families… 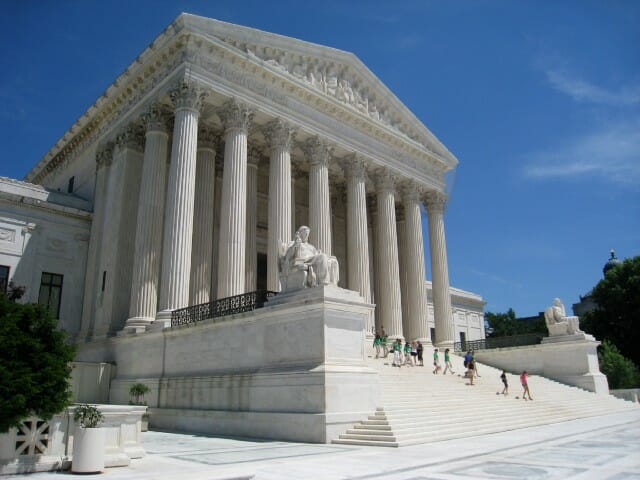 The big news in immigration is the Supreme Court’s recent decision to allow parts of the Executive Order banning nationals from six Muslim-majority countries from entering the United States, in advance of a review scheduled for October. The Court’s ruling specifically noted that the travel ban “may not be enforced against foreign nationals who have a credible claim of a bona fide relationship with a person or entity in the United States.” This includes employees of U.S. companies, students at U.S. universities, and close family members of U.S. residents—just defined by the State Department to include certain relationships (e.g. siblings) and exclude others (e.g. grandparents). Anyone in those categories must be issued visas and admitted to the United States as before. This means that even for those living in one of the six countries named in the Executive Order, applications for a marriage green card should not be affected.

Rights for the detained?

The Supreme Court will also weigh in on another major immigration controversy: Whether or not immigrants in deportation proceedings can be jailed indefinitely. A federal court has ruled that foreign nationals in immigration detention have a right to a bond hearing every six months. The executive branch argued that immigrants can be detained indefinitely without a bond hearing. The Supreme Court agreed to re-hear the case, which could have broad implications for immigrants accused of even relatively minor crimes. Regardless of how the Court rules, this case underscores how important it is for all immigrants, even green card holders, to avoid problems with the law.

This is especially true in light of another Executive Order threatening to cut federal funding to cities where law enforcement officers don’t fully cooperate with federal immigration authorities. The order was signed in January but blocked by a federal judge after lawsuits from several cities challenged its legality. At the end of June, mayors from around the country drafted a resolution strongly opposing what they see as federal overreach into cities’ law enforcement tactics. How this will affect immigrants and their families remains to be seen, and will likely continue to play out in the courts—especially because most policy regarding communication between local law enforcement and federal immigration authorities is made at the county and state level rather than by cities.

The Supreme Court just made it more difficult to strip naturalized citizens of their U.S citizenship for lying on immigration forms, ruling that minor misrepresentations are not grounds to revoke citizenship. The Court also ruled in favor of an immigrant in a case involving bad attorney advice, giving a second chance to a green card holder whose attorney erroneously told him that a guilty plea would prevent him from being deported.

Meanwhile, some of the immigration landscape appears to have changed based more on rhetoric than court cases.

Immigration lawyers started seeing inquiries doubling—or more—beginning late last year, and that trend has continued. Immigration lawyers report an increase in both deportation protection and family-based visa cases. That means it’s probably harder to find an immigration attorney to help prepare green card applications, and lawyers around the country are more overworked than ever.

Anxieties about immigration policy seem to have prompted a significant increase in naturalization applications. On the flip side, for the first time in years, there was a decrease in employer-sponsored visa applications in 2017, along with a notable decrease in the rate of foreign students applying to study at U.S. universities.

Despite a month filled with immigration-related headlines, and apart from a redesigned green card application form, we haven’t seen major changes in family-based immigration system yet.

All the more reason to file your marriage-based green card application soon—and Boundless can help you navigate the process with confidence. Get started today!