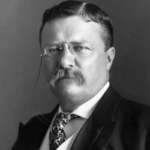 When Theodore Roosevelt became the 26th president following the 1901 assassination of President William McKinley, he was the youngest person to hold the office. He was president until 1909.

Roosevelt was president during a time of significant immigration — between 1900 and 1915 America welcomed over 15 million immigrants — as many as it had during the previous 40 years. During that time period more than 13% of the U.S. population were foreign-born, with the vast majority of them from Europe.

Key immigration laws passed during Theodore Roosevelt’s administration included the 1903 Anarchist Exclusion Act, which barred political extremists, beggars and epileptics from entering the country — the first time that political beliefs had been added to the list of disqualifications for immigration.

The Naturalization Act of 1906 created a new Bureau of Immigration and Naturalization within the U.S. Commerce Department, and added English proficiency as a requirement for naturalization.

After he left office, Theodore Roosevelt fell out with the Republican Party establishment and ran unsuccessfully for another term as a progressive in 1912. At the end of his life he made his most famous direct statement on immigration and naturalization. In a letter published before his death in 1919, Roosevelt wrote: