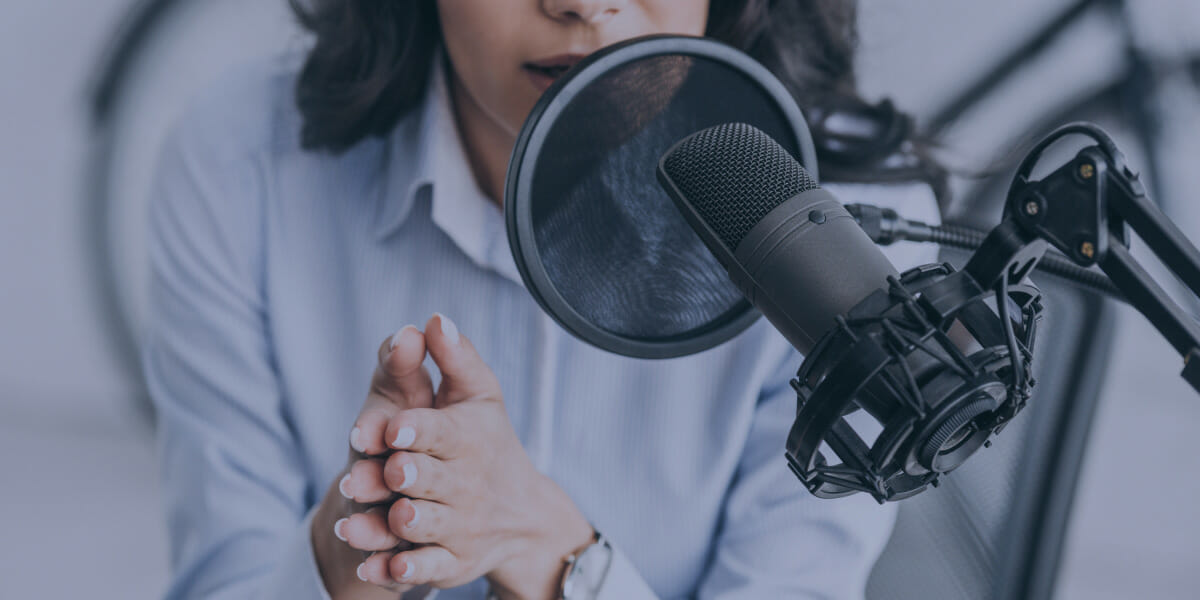 What does it mean to be an immigrant in the United States? These podcasts answer this question as it deserves to be answered: by immigrants themselves. From reported series to curated conversations, each of these shows illuminate different aspects of the immigrant identity — such as the realities of integrating into a new country, the implications of the COVID-19 pandemic, and the factors that brought families to the United States in the first place. 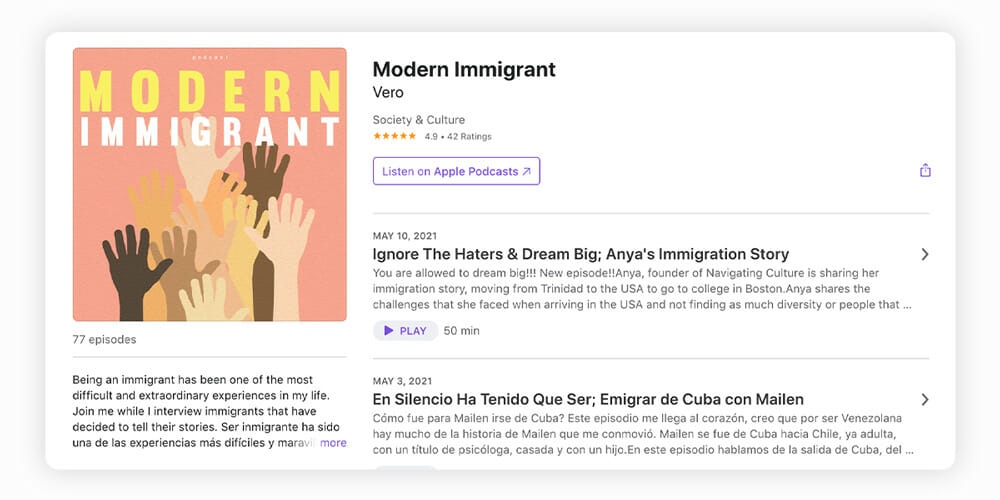 Modern Immigrant is a weekly podcast that explores immigrant life in the United States. Hosted by Vero, who is originally from Caracas, Venezuela, the podcast delves into conversations that amplify immigrant voices, with topics that range from the power of Latino representation to the impact of President Biden’s newest immigration bill (featuring Boundless Immigration’s own legal policy and business operations lead Maggie Riley). Episodes are released in both Spanish and English. 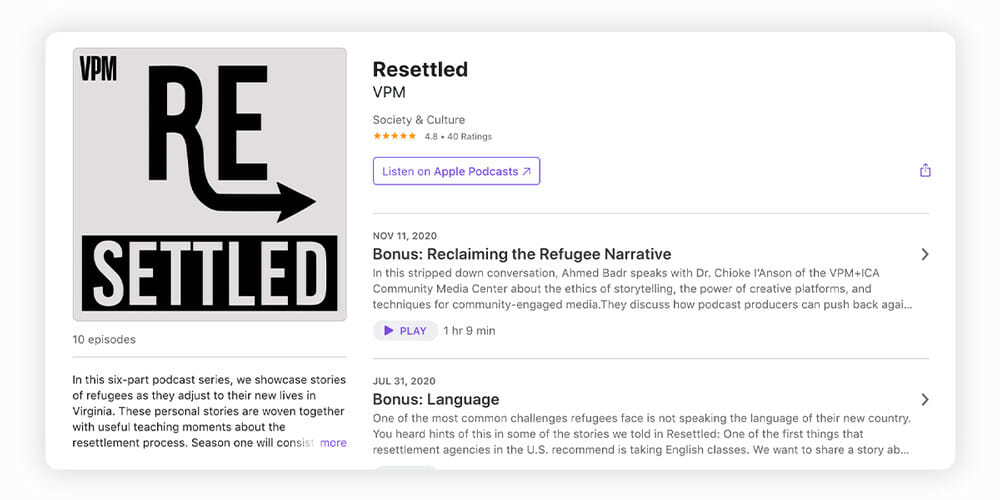 This six-part podcast series showcases the stories of refugees as they adjust to their new lives in Virginia, from a Muslim teen’s experience navigating high school to one family’s first 90 days adjusting to life in their new home. Hosted by Ahmed Badr, the themes of Resettled resonate with broader facets of the immigrant experience by exploring the realities of integrating into an unfamiliar space — like when Chef Noori shares how he maintains his culture in his new home through Afghan cuisine, or Ahmed Alsrya’s story about breaking down the stigma of mental health. 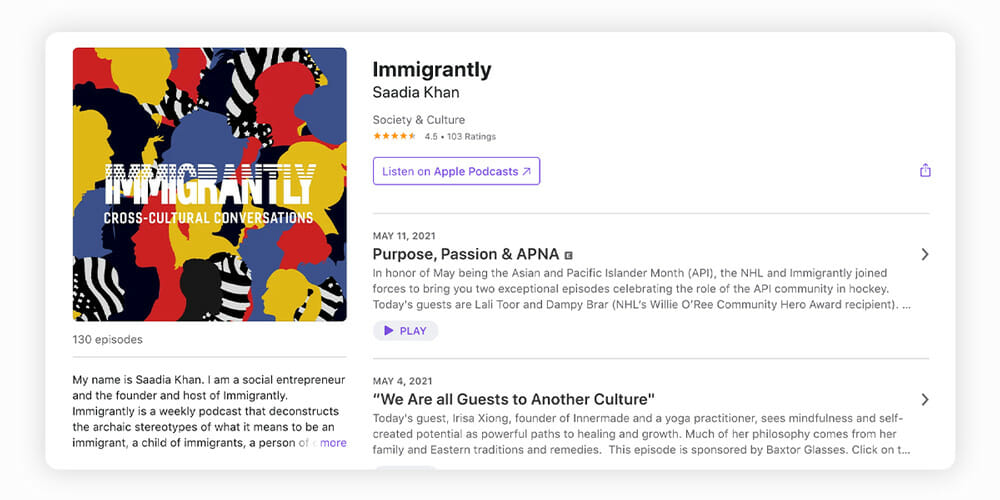 Now in its ninth season, Immigrantly is a weekly podcast that “deconstructs the archaic stereotypes of what it means to be an immigrant, a child of immigrants, a person of color, and everything in between.” Host Saadia Khan speaks with a broad range of people to explore these complex, cross-cultural topics and the nuances of the human experience, including journalist Wajahat Ali, multidisciplinary artist Shahzia Sikander, and food writer and photographer Nik Sharma. 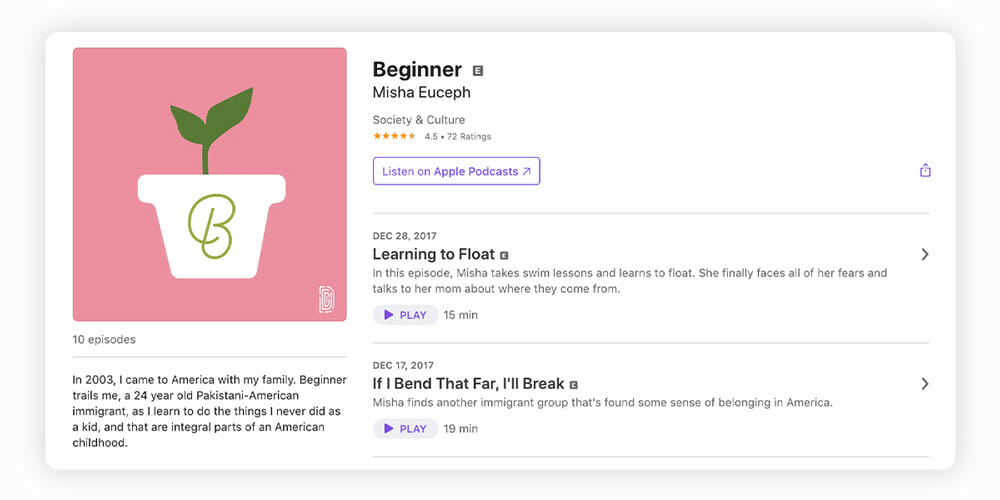 Beginner is about Misha, a 24-year-old Pakistani American immigrant who came to America with her parents in 2003. The series follows Misha as she builds her own American childhood, learning how to do the things her Los Angeles-born younger sister grew up with — like riding a bike, swimming, and singing. Although Beginner hasn’t been updated since December 2017, the 10 available episodes offer an intimate look at Misa’s experience as she searches for a sense of belonging. 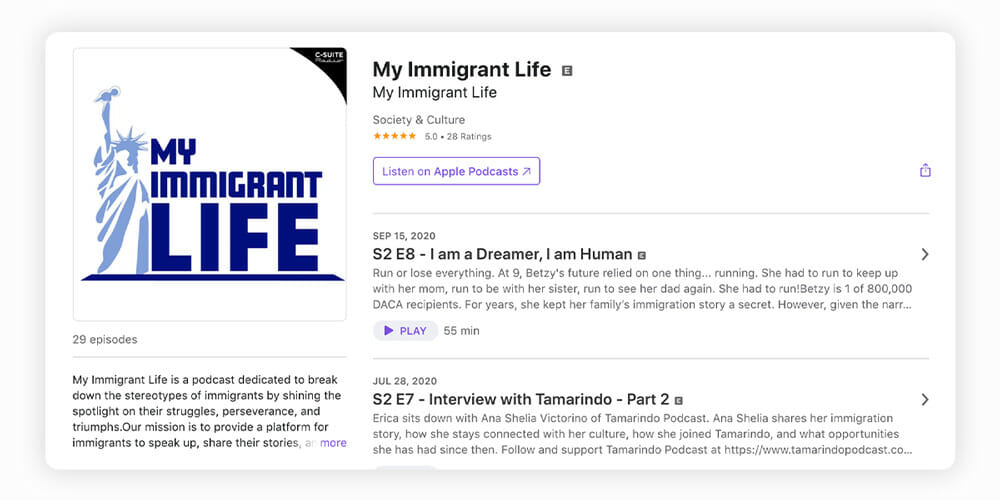 In the late ‘70s, host Erica Hernandez’s parents left Mexico to immigrate to the United States. Inspired by the conversations at home about the ways immigration policies affected her family and her community, Hernandez launched My Immigrant Life as a platform for immigrants to share their stories and break down stereotypes because “not all immigrant stories are created equal.” The podcast hasn’t been published since September 2020, but available episodes range from in-depth personal stories — like Rose Castorillo’s experience as she and her family learned to survive in America after immigrating from the Philippines — to interviews with immigrants like Brenda Gonzalez, creator of the Tamarindo Podcast.

How has the United States’ response to COVID-19 impacted immigrants? That’s the question A Better Life? seeks to answer. Each episode focuses on the immigrant experience through the lens of the COVID-19 pandemic, from an undocumented immigrant’s experience coming back from losing her job to one immigrant woman’s decision to walk way from an abusive relationship. A Better Life? features the work of journalists who are immigrants or children of immigrants, and although the feed hasn’t been updated since January 2021, the stories span all of 2020 — a veritable time capsule of what it was like to be an immigrant at the start of a global pandemic. 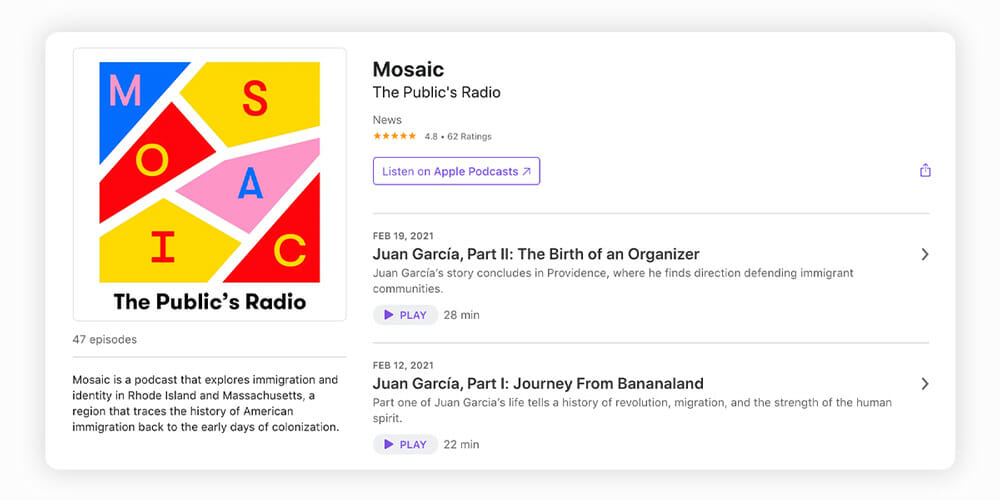 Mosaic showcases immigrants stories from Rhode Island and Massachusetts, regions that saw strong influxes of immigrant families in the early 20th century. “Mosaic is not about politics. It’s about people,” says host Ana Gonzalez in the intro to Mosaic’s second season. In this way, although the show focuses on regional immigrant experiences, the stories are universal. Episodes range from interviews to reported pieces about factors that have shaped the immigrant experience, including a deep-dive into the complicated history of triple-decker homes and the far-reaching impact of a youth baseball organization based in Providence.. 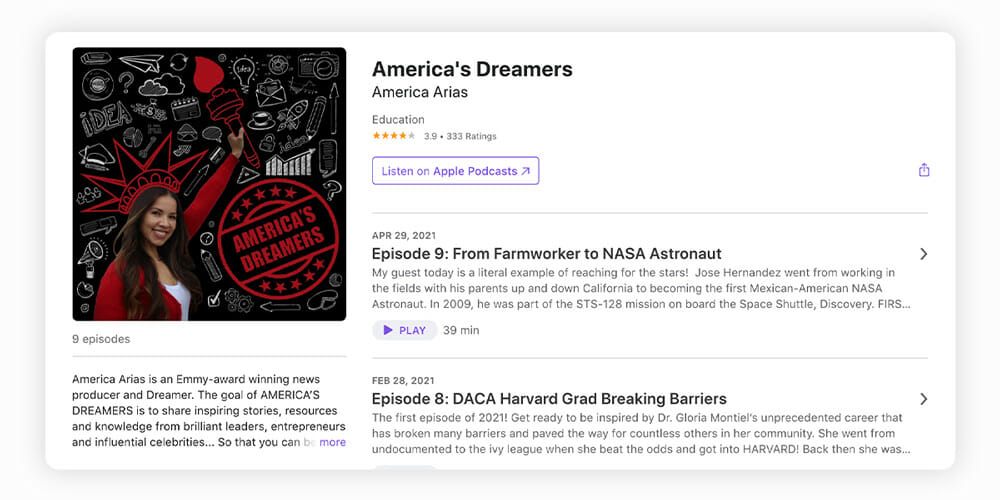 If you’re looking for a podcast that will inspire you to chase your dreams, this one’s for you. Hosted by Emmy award-winning producer America Arias, each episode of America’s Dreamers shares inspiring stories about a DACA (Deferred Action for Childhood Arrivals) recipient who is making major contributions in their professional industry. Arias’s guests include Olympic runner Brenda Martinez; award-winning director, writer, and actor Jorge Xolalpa; and Dr. Gloria Montiel’s journey from undocumented student to Harvard graduate.