It’s time for the Office of the Citizenship and Immigration Services Ombudsman’s 2017 Annual Report to Congress! We read the whole report so you can enjoy this blog-length summary instead…

(Fun fact: the word “ombudsman” comes from Swedish, putting it in the good company of “rutabaga” and “smorgasbord.”)

The CIS Ombudsman doesn’t just write reports — it can be a helpful “office of last resort” for people running into unusual delays or other problems while navigating the immigration system. Check out this overview of when the Ombudsman can provide case assistance. If you’re eligible, you can request help here.

Between 2015 and 2016, the Ombudsman saw a 25% jump in the number of requests for help, primarily due to delays beyond normal processing times, and most commonly related to green card applications.

In April of last year, USCIS started scanning paper naturalization applications into its internal “electronic adjudication” system, but stopped four months later. This behind-the-scenes digital process apparently suffered from technical difficulties, and the Ombudsman is currently monitoring whether these issues will result in extra delays.

Note that apparently you can file your citizenship application online, even if the back-office process is still paper-based. So says Footnote #34 of the report: “USCIS has chosen to maintain limited access to an online filing feature through the myUSCIS portal on the USCIS website.” (Yes, we read through all of the footnotes for you…)

Say that you are applying for a marriage green card, but you have been in the United States without a valid visa for over 180 days. There’s no avoiding the fact that you can’t complete your green card application from within the United States — you’re required to travel abroad and get your application approved at a U.S. embassy or consulate. But what if you’re denied?

In 2016, USCIS enhanced a policy to reduce that worry, through something called “Provisional Unlawful Presence Waivers.” Basically, if you’re (a) eligible for any kind of green card, (b) “inadmissible” to the United States strictly because you stayed longer than 180 days without a valid visa, and (c) eligible for a waiver of that inadmissibility, then you can apply for a “provisional waiver” before you leave the United States for your green card interview abroad. This can significantly reduce the risk of leaving the country and then being barred from returning for 3–10 years, all for lack of the necessary waiver.

Since USCIS expanded eligibility for these provisional waivers, demand has gone up, with over 57,000 applications received in 2016. That’s a 19% increase over 2015 and a 35% increase over 2014. Processing times have increased, too — from an average of 3.3 months in 2015 to at least 5.75 months in 2016. The Ombudsman notes that “stakeholders reported adjudications taking as long as 8 months,” and reiterates that it is open for case assistance requests.

USCIS is funded almost entirely by user fees (not by taxpayers). In December 2016, USCIS raised its fees by an average of 21% in order to hire more staff and process applications more efficiently. At the same time, though, they’re receiving a lot more applications across the board, they’re trying to enhance the quality of adjudications, and fraud/security reviews are getting more complex.
The report concludes: “Customer-reported adjudication delays, coupled with the agency’s 1.5 million case backlog, reflect that USCIS is currently unable to meet its processing time goals, and unlikely to do so in the near future.”
The report also includes a handy chart comparing last year’s actual processing times with USCIS’ goals from a decade ago (that’s when the agency got a big cash infusion from a much higher fee increase, and temporarily slashed its backlog): 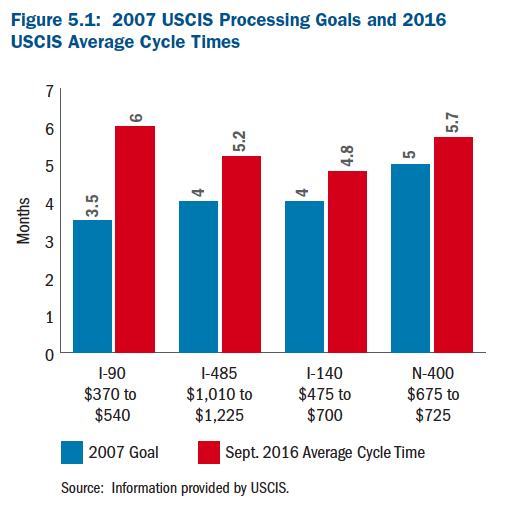 Looking for some good news? The report applauds USCIS for improving the way that it reports actual processing times. (Note that if you’re filing a Form I-130 and a Form I-485 at the same time, the timeline for this “concurrent filing” is reflected by USCIS’ processing time for just the I-485 at the relevant field office.)

You do not want your eagerly-awaited green card or other immigration documents lost in the mail. Yet the Ombudsman report has some hair-raising stats:

Fortunately, there’s something you can do to help ensure that your immigration documents get to the right destination: Follow the USCIS change of address instructions very, very carefully.

For example, if you have a pending or recently approved application, it’s not enough to file the typical change-of-address form (the AR-11). You may need to make a phone call to USCIS to make sure your address gets changed in time — not difficult, but essential!