The Biden administration’s proposed immigration bill would increase annual green card numbers by 35%, according to a new Boundless analysis.

Boundless estimates that the number of immigrants obtaining lawful permanent residency (a “green card“) would rise by nearly 375,500 each year if the U.S. Citizenship Act were enacted, bringing the total to about 1.5 million annually. The current baseline is just under 1.1 million green cards per year, using the annual five-year average across Fiscal Years 2014 to 2018.

The greatest increases would be in the employment-based categories and the Diversity Visa program. If the bill passes, an additional 80,000 advanced degree workers would be granted permanent residency, along with more than 78,000 “first preference” workers (people with “extraordinary ability,” university professors and researchers, and executives or managers at multinational companies). The number of Diversity Visas would increase by more than half, from 50,000 to about 120,000 per year. 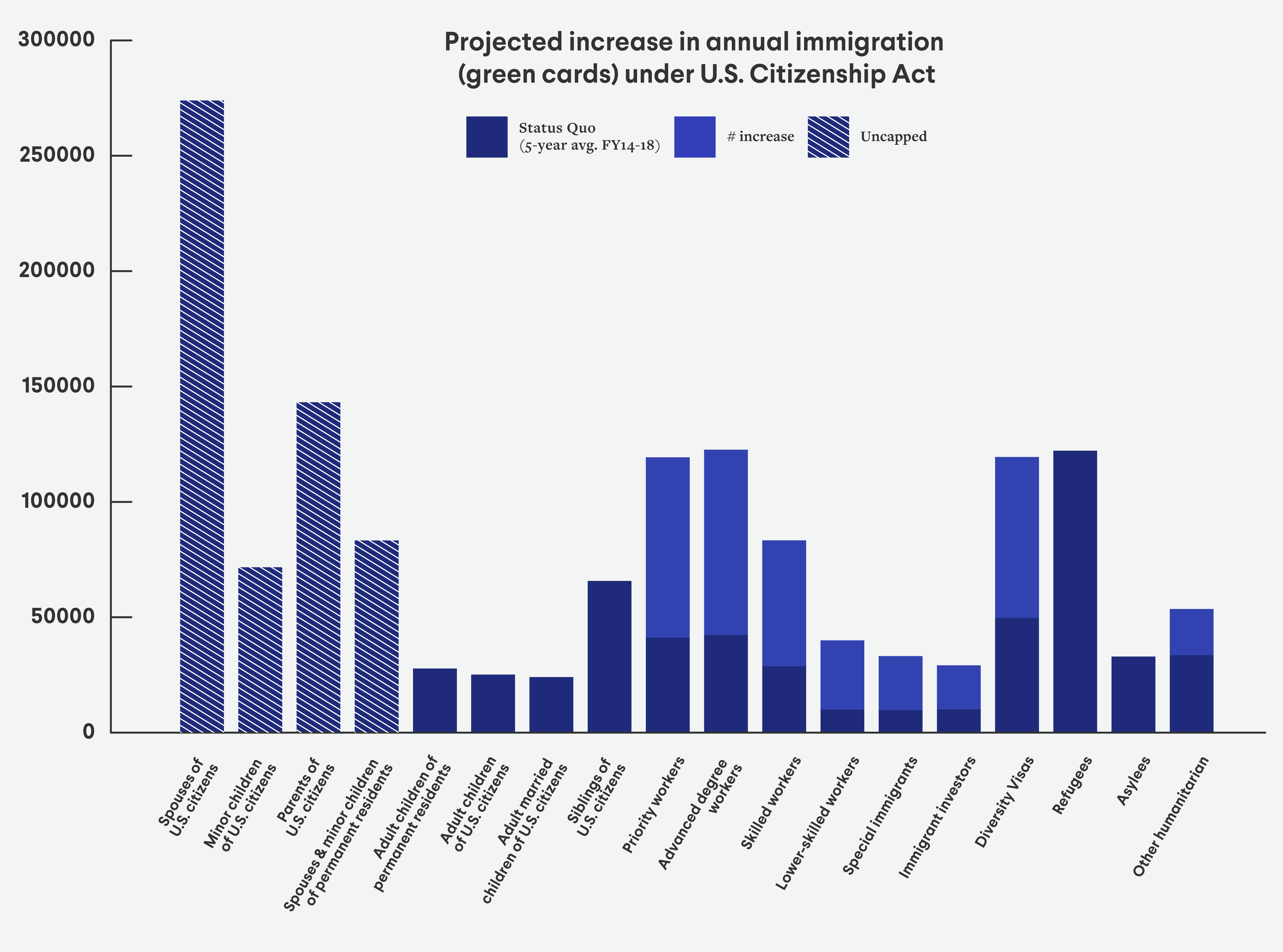 Boundless drew from a previous analysis by the non-partisan National Foundation for American Policy (NFAP), which projected a slightly lower 28% annual increase in future green card numbers. The NFAP used only FY2016 as its baseline, and unlike Boundless, did not include the bill’s increase in some visa categories, such as the U visa for certain crime victims who cooperate with law enforcement. Boundless used NFAP’s assumptions about which categories would likely experience increased demand.

The U.S. Citizenship Act would make several key changes to “future flows” of legal immigration, including:

“Just because the bill raises a visa cap does not necessarily mean that all of those green cards will be used in a given year,” said Doug Rand, Boundless co-founder and immigration policy expert.

If welcoming several hundred thousand more permanent residents to the United States each year sounds like a lot, it’s not, added Rand.

The United States currently issues far fewer green cards compared to its peer countries. Canada and Australia, for instance, offer permanent residency to more than twice as many immigrants, and New Zealand triple as many, compared with the United States on a population-adjusted basis.

With the falling birth rate in the United States, “an approximate 37% increase in annual immigration levels is required to help maintain the current age dependency ratio by 2060 and reduce the ill effects associated with significant demographic decline,” according to the National Immigration Forum, an immigrant advocacy group.