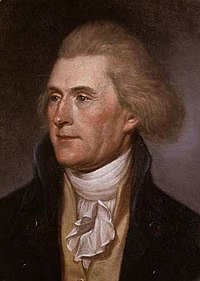 In his Notes on Virginia, written in the early 1780s, Thomas Jefferson expressed skepticism that large numbers of immigrants from culturally different countries would help the U.S. to thrive. “Suppose 20 millions of republican Americans thrown all of a sudden into France, what would be the condition of that kingdom?,” he wrote. “If it would be more turbulent, less happy, less strong, we may believe that the addition of half a million of foreigners to our present numbers would produce a similar effect here.”

While president, though, Jefferson had come to believe that significant immigration was necessary for the success of the new republic. In his first report to Congress, Jefferson called for a loosening of the policy which only allowed immigrants to become citizens after 14 years’ residence: “Shall we refuse the unhappy fugitives from distress that hospitality which the savages of the wilderness extended to our fathers arriving in this land? Shall oppressed humanity find no asylum on this globe?”

In the same speech, Jefferson noted approvingly the population growth reported in the latest census — growth that would not have been possible without immigrants. “We contemplate this rapid growth, and the prospect it holds up to us,” Jefferson said “not with a view to the injuries it may enable us to do to others in some future day, but to the settlement of the extensive country still remaining vacant within our limits, to the multiplications of men susceptible of happiness, educated in the love of order, habituated to self-government, and value its blessings above all price.”