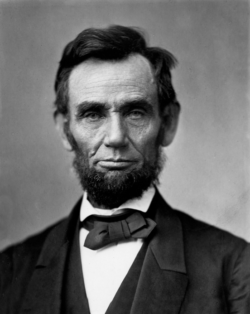 During the years before he ran for president, Abraham Lincoln made it clear that he found the anti-immigrant sympathies of the nativist “Know-Nothing Party” to be hypocritical. In an 1855 letter, he wrote that “As a nation, we begin by declaring that ‘all men are created equal.’ We now practically read it ‘all men are created equal, except negroes.’ When the Know-Nothings get control, it will read ‘all men are created equal, except negroes, and foreigners, and catholics.’ When it comes to this I should prefer emigrating to some country where they make no pretence of loving liberty — to Russia, for instance, where despotism can be taken pure, and without the base alloy of hypocracy.”

On July 4, 1864 President Abraham Lincoln singed An Act to Encourage Immigration into law. The act created the office of U.S. immigration commissioner, banned indentured servitude for periods longer than a year (stipulating that an employer who paid a worker’s passage to the U.S. could only seize their wages for up to 12 months), and said that immigrants could not be immediately drafted to fight in the Civil War unless they renounced their prior allegiances and declared an intention to become U.S. citizens.

During the course of the Civil War, immigrants had formed a significant portion of the Union Army, with more than 200,000 German-born and 150,000 Irish-born serving.