Nicknamed the “Nobel Prize in Political Science,” the Johan Skytte Prize has been awarded annually since 1995 “to the scholar who in the view of the Foundation has made the most valuable contribution to political science.” These Skytte Prize-winners had something else in common besides influence in their fields: all emigrated to the U.S. from their countries of origin.

Juan José Linz won the second Skytte Prize in 1996 “for his global investigation of the fragility of democracy in the face of the authoritarian threat, characterized by methodological versatility and historical and sociological breadth.” Born in Germany in 1926, Linz spent much of his career at Yale. Linz died in New Haven in 2013.

Arend Lijphart won the 1997 Skytte prize “for his theoretically and empirically pathbreaking research on the function of consensus in democratic politics in divided as well as inhomogeneous societies.” Born in the Netherlands in 1936, he received his Ph.D. at Yale.

Brian Barry won the Skytte Prize in 2001 “for his profound contribution to normative political theory performed with passion as well as clarity in the grand tradition from the Enlightenment.” Born and educated in England, Barry spent a significant portion of his career teaching in at U.S. universities.

Hanna Fenichel Pitkin won the Skytte Prize in 2003 “for her pathbreaking theoretical work, predominantly on the problem of representation.” Born in Berlin, she emigrated to the U.S. in 1938 and studied and later taught at U.C. Berkeley.

Rein Taagepera won the 2008 Skytte Prize “for his profound analysis of the function of electoral systems in a representative democracy.” The Estonia-born, University of Delaware-educated political scientist returned to his home country in 1991.

Adam Przeworski won the Skytte Prize in 2010 for “essentially raising the scientific standards regarding the analysis of the relations between democracy, capitalism and economic development.” He was born in Poland in 1940, received his Ph.D. at Northwestern University and is currently a professor at New York University. 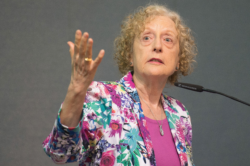 Carole Pateman won the Skytte Prize in 2012 “for in a thought-provoking way challenging established ideas about participation, sex and equality.” She was born in England but taught for years at the University of California, Los Angeles.