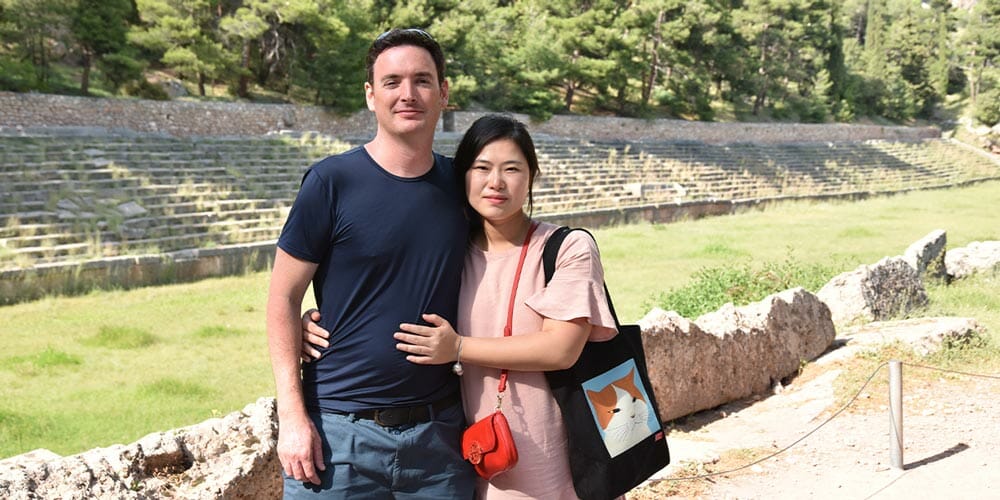 Originally from Maine, Ryan has spent his entire career abroad, from the Middle East to Europe, and for over ten years in business development with various multinational organizations in Shanghai, China.

Ryeojin is from Seoul, South Korea and worked with the South Korean consulate in Shanghai as a translator. She has studied, lived and worked across China over the past decade, from Beijing to Suzhou and Shanghai.

Ryan and Ryeojin went on their first date in 2013, “on a glorious autumn night” in Shanghai. Ryan spoke no Korean and Ryeojin spoke little English.

“We communicated in Mandarin, delighted in doing things we had not done before then never doing again, bonded over spicy food and beer, and found that in our vast differences, we were kindred spirits,” Ryan told Boundless.

We caught up with Ryan to learn more about their experience with Boundless and the marriage green card application process.

How did you discover Boundless?

I read an article in the New York Times that had mentioned Boundless as an up-and-coming startup that had simplified the process of applying for marriage-based green cards (exactly what we were looking for) and I went to their website to check them out.

“ I’ve already recommended Boundless to several of my friends who are now in the process of applying for their marriage-based green cards. ” – Ryan

Did you consider applying on your own or using an immigration attorney?

“Speaking to several of the better-known immigration practices, at the time they would handle our case for upwards of $5,000. This was 2018, and no doubt their prices have since risen. Or we could use Boundless who would do the same thing for a fraction of the price and they would always, always answer your call (or email). Or we could do it ourselves and essentially roll the dice that everything was perfect on something that you basically get one shot to get right.

Between the choices of wading into the process ourselves with no experience in immigration and hiring an expensive immigration attorney, trying a reasonably priced alternative that was incredibly responsive to all my questions even prior to sending them a fee seemed the right way to go.”

What stood out to you about the Boundless service?

Two things: your responsiveness and your attention to detail.

Boundless from the outset gave a realistic timeline of events, set reasonable expectations, proactively sent messages anticipating the types of worries and concerns we might have as well as strategies and solutions for working through them, and never took more than 24 hours to respond to any message or inquiry we would send.

Furthermore, all documents we submitted through their easy-to-use online portal were checked and sometimes returned to us in the case that we had made some small error or accidental omission. They went over everything.

“Boundless would always, always answer my call or email.” – Ryan

Can you tell us about the green card interview? How prepared did you feel?

Prior to our [interview], Boundless had sent us a binder that contained our application with tabs indicating all the pertinent sections that the interviewer could jump to easily. The officer even complimented Ryeojin on the completeness of her application package, commenting that “they aren’t all this organized.” In the end, the interview was a success. We entered the United States just a few weeks later, and a few weeks after that, Ryeojin’s green card arrived.

All of it was made possible – and a hundred times easier – because we chose to work with the people at Boundless.

On a scale of 1 to 10, how likely are you to recommend Boundless to others?

Would have to be a strong and unequivocal 10. I’ve already recommended Boundless to several of my friends who are now in the process of applying for their marriage-based green cards.

Our friends who used one of the largest (and most expensive) immigration attorneys in the world to expedite their marriage-based green cards discovered just prior to their interview that the attorney had not asked for a critical document, resulting in their having to postpone their interview while they worked to amend the application package. Exactly the reason you hire an immigration attorney in the first place.

Our experience with Boundless encountered no such errors and we went through every step of the process basically flawlessly.